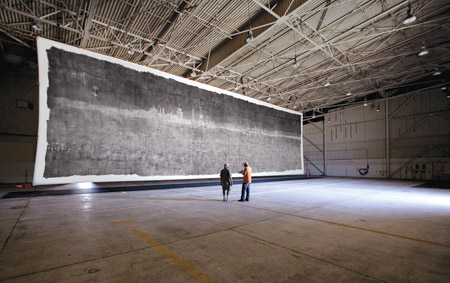 The Legacy Project, 'The Great Picture,' 2006, Gelatin silver negative on muslin, 372'' x 1332'' Installation at El Toro Marine Base Photo: courtesy The Legacy Project and Culver Center of the Arts

To view The Great Picture in its current horseshoe-shaped configuration is to witness a photographic artwork that is awe-inspiring in size and impressive in technology. At 111 feet wide by 32 feet high, The Great Picture is as much a statement about photography's history and its future possibilities as it is a giant work of art. Stand next to it and you'll see a picture that is more conceptually than aesthetically appealing, that is nearly overwhelming with its fuzzy, B&W depiction of a decommissioned marine base, flanked by hi-tech Irvine, California and the undulating hills beyond. As Tyler Stallings, Director at UCR Sweeney Art Gallery & Culver Center of the Arts, and curator of its current Great Picture exhibition, writes in the book, "The Great Picture: The Making of the World's Largest Photograph" "At a distance, the scale of The Great Picture's grayish canvas and hazy image also possesses the minimalist monumentality of the two black granite walls that form Maya Lin's 1982 Vietnam Veterans Memorial in Washington, D.C."

The Great Picture is the result of a grand experiment by six photographers who call themselves The Legacy Project. From May to July 2006, Project members retrofitted a jet hangar into a camera obscura, and then used the ancient pinhole camera technique to capture the El Toro Marine Corps Air Station during its transitional stages to the Orange County Great Park. For many observers of The Great Picture and its months long period of creation (myself included, as the partner of Legacy member Mark Chamberlain), the photograph and its prideful name are also manifestations of the Project's ambitions to test the limits of photography. Author Dawn Hassett (wife of Legacy Project member Doug McCulloh) describes these ambitions, as well as their fears, frustrations and explosive behavior while they grappled with extraordinary technical challenges, mounting costs and pressing deadlines in "The Great Picture" book. She also discusses the significance of The Great Picture/ Legacy Project's Orange County location.

In July 2006, the six Legacy Project members, Jerry Burchfield, Mark Chamberlain, Jacques Garnier, Rob Johnson, Doug McCulloh and Clayton Spada, accompanied by 400 volunteers, shot and processed The Great Picture photograph. They converted an F-18 jet maintenance hangar at the El Toro base into a camera obscura, then made their exposure through a 6-millimeter pinhole as a lens onto a single seamless muslin canvas, imported from Germany. They spent 35 minutes capturing the black-and-white image and processed the photograph in an Olympic pool-size developing tray. The picture depicts the control tower, structures and runways of the former ET MCAS, with a backdrop of the San Joaquin Hills. The Guinness Book of Records has certified the camera obscura, 160 feet wide by 45 feet high, as the largest camera ever. Noted art writer Lucy R. Lippard states in "The Great Picture" book that i t"...transcends such motives by sheer effrontery, or rather by lack thereof. The elusive image doesn't force itself out like a billboard, but hangs back, with a certain overcast reticence signaling that there is more to it than size."

The Great Picture dwarfs in self-importance but not in achievement the overall Legacy Project. Conceived in 2002 and established as a nonprofit in 2004 by Burchfield, Chamberlain and Spada (the other three members joined later), the Legacy Project is documenting the transition of ET MCAS into the 1,300 acre Orange County Great Park over 15 years. To date, Legacy members have taken an estimated 200,000 pictures, plus extensive video footage, and participated in historical narratives of the site. Early photos of the shuttered 4,700-acre military community include residences, schools, churches, theaters, playgrounds, shopping centers, runways and hangars that comprised "home" for thousands of Marines and their families since the 1940s. Selected early Legacy Project images of structures, runways and landscapes--many torn down and built over by the Great Park Corporation--complement the Sweeney/Culver exhibition.

As Legacy Project co-founder Chamberlain said in 2004, "It was a shooter's delight and this haunting landscape gave us all itchy trigger fingers." Co-founder Burchfield, who passed away in September 2009, observed in 2007, "In the future, our work should have real value historically for the region and beyond as documentation of change over time, and as art. This project is setting new precedents in the photo world, showing how documentary projects can transcend the old models.Â As for impacting peoples' understanding of the world around them, well that is what we hope our work will do."