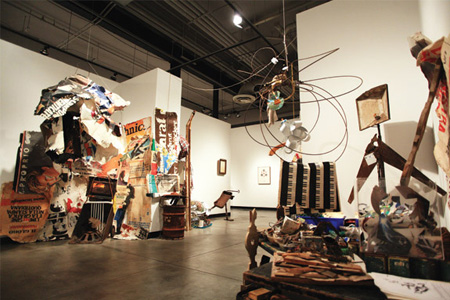 George Herms’ “Chaos’ Job: Restrain Order” lies somewhere between chaos and order. The show is composed of a potpourri of: an ancient, rusted ironing board, wheel barrow, lawn mower, muffin tin, fan, early cell phone, broken mirrors, torn crumpled posters, a collection of miniature cars, lamp bases, an old pink tea kettle, several broken plastic bowls filled with endless piles of rusted tools, as well as numerous other detritus. The artist attaches, arranges and piles up these bits of trash into harmonious assemblage artworks that bear little resemblance to the themed boxes of Joseph Cornell or of Janice Lowry, whose works were shown in the same venue earlier this year.

Accompanied by an Artist’s Statement of meaningless (to most of us) black squiggles on white paper and by titles such as “Trifed Nebula” and “Golden Globe of Amber,” Herms takes this now century-old technique to its ultimate, enigmatic stage. These are harmonious, nostalgic pieces and installations that bear the simplicity of haiku poetry. When asked if he builds his pieces with intention or randomly, he responds, “The inanimate objects tell me what to do.” Indeed, these inanimate objects have much to say about the value of cherishing what many consider as junk and about seeing beyond the conventionally accepted norms of beauty.