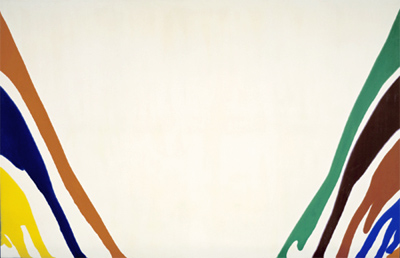 "Color Field Paintings and Related Abstractions Revisited" at Wright Exhibition Space (which runs to September 24) is an expansion of a 2004 survey curated by Virginia Wright and drawn almost exclusively from the Virginia and Bagley Wright Collection. Few private art museums--the Wrights' opened in 1999--could so easily dip into their own holdings in order to provide such helpful contextual examples of artists who preceded and followed the heyday of Color Field, from 1955-1975. Virginia Wright (assisted by Sylvia Fisher) added paintings and sculptures by Hans Hofmann, Anne Truitt, Gerhard Richter and Mary Corse that were not seen in 2004. These partially make up for the omission of canonical works that were seen before, chiefly Mem and Overhang (both 1960) by Morris Louis, which proved too large and cumbersome to remove from the dining room of the Wrights' condo.

The selection underscores the careful collecting choices made by the Wrights over the years, always tempering the encouragement and strong suggestions of their friend art critic Clement Greenberg. As Bagley Wright (who died this summer, on July 18, 2011) noted in the 1999 Seattle Art Museum catalogue essay of their collection, "Clem's reputation was on the wane even as we were buying the Color Field painters in his canon... Who knows? Olitski may yet be revealed as the artist Clem thought he was... I'm not so sure I care very much if some of our paintings or sculptures turn out to be ephemeral."

Within a short period, they assembled very large canvases by Jules Olitski (five on view); Kenneth Noland (six on view); Louis (three in total, but only Alpha Mu, 1961, on view); and Larry Poons (three on view). Over 40 years later, these pictures look better and better. Some were denigrated originally by Seattle art critics ("pompous trivia... tricks and kicks," Anne G. Todd, Seattle Times, April 29, 1962) as well as more astutely analyzed by New Yorkers ("among the most radical and ambitious [paintings] being done, yet they are never quite convincing," wrote Donald Judd on Olitski in Arts Magazine, in March, 1962).

Undergoing serious reappraisal in recent exhibitions such as "Color Field Revisited: Paintings from the Albright-Knox Gallery" (2004) and "Color As Field: American Painting, 1950-1975" (Denver Art Museum, 2008), these works have been gradually decoupled from Greenberg's theoretical support. Even Karen Wilkin (curator of the Denver show and an art critic sympathetic to Greenberg) stated that Greenberg's "enthusiasm has been detrimental."

What, then, is the appeal of Color Field? Much of it is purely sensual and optical, "free of any troubling content," as Matisse put it, and without hortatory, scolding mechanisms. Going beyond Barnett Newman's and Clyfford Still's alternately vibrating or agitated surfaces, Color Field alternately reanimates and de-materializes the presence of paint. Olitski wished he could spray paint and have it remain in mid-air. Poons' Untitled (1974, on view), by contrast, spills "cascades of indescribable hues," to quote Wilkin, through layer after layer of thick, poured acrylic.

Admiring Poons's masterpiece, Knoxville (1966), a midnight-black sky with a thousand purple fireflies, or Olitski's ecstatic Pink Tinge (1967), probably the largest all-pink painting ever made, at over 12 feet wide, Wilkin's three new virtues for Color Field come to mind: size, touch and "an economy of means that ravish the eyes."

Before the Wrights moved back to Seattle in 1955, Bagley had been a journalist at Newsweek and Virginia was the sole gallery assistant at Sidney Janis. She was 23 when she bought her Rothko (No. 10, 1952) from Betty Parsons and had to be vetted as "worthy" by Rothko, a test she quickly passed, as a former Barnard student of art historian Meyer Schapiro. It was Schapiro who told her "that what was going on in New York was a continuation of things that had started in Europe in the 1850s." Once back in Seattle, the two had their work cut out for them and soon helped co-found Seattle Repertory Theatre as well as actively supporting Seattle Symphony and Pacific Northwest Ballet. As former SAM director Mimi Gardner Gates put it at the memorial, they were "changing the cultural profile of the Pacific Northwest."

Bagley Wright's death has reinforced his crucial role in collection formation, both for himself and Virginia, but also for the numerous institutions to which they donated art and artifacts, including the Seattle Art Museum, Henry Art Gallery, Portland Art Museum, Princeton University and Whatcom Museum. His first acquisition on his own was Kline's Cross Section (1958). Unlike many other New York School collectors, the couple proceeded onward to Jasper Johns (Thermometer, 1959), Robert Rauschenberg (Octave, 1960), through Color Field, and on to Pop Art and Minimalism (both to the disapproval of Greenberg), Neo-Expressionism (Clemente, Schnabel, Salle, Rothenberg), and the Europeans of the 1980s and 1990s (Kiefer, Richter, Ruckriem, Fritsch, Cattelan). The bulk of the collection will go to Seattle Art Museum.

Bagley and Virginia Wright both served as board presidents for the Seattle Art Museum (where their son Charlie currently serves as Chair of SAM's Board of Trustees) and Bagley was once interim director. Thanks to their invitations, numerous New York artists, critics, curators and dealers visited Seattle for important cultural events such as panel discussions and symposia. Over the years, their number included Thomas B. Hess (ARTnews); Hilton Kramer (New York Times); Harold Rosenberg (The New Yorker); Max Kozloff and John Coplans (Artforum); dealers Richard Bellamy, Mary Boone, Paula Cooper and Andre Emmerich; as well as artists such as Michael Heizer, Donald Judd, Richard Serra, Nancy Holt and Tony Smith.

Besides the SAM donations, the Wrights (through his-and-her endowments, the Virginia Wright Fund and the Bagley Wright Family Fund) also made possible the Outdoor Sculpture Collection at Western Washington University and the Olympic Sculpture Park, a free public park administered by SAM with gifts of art from the Wrights by Serra, Smith, di Suvero, and others. For those who cannot make the visit to Seattle, or those who can but want more, a volume documenting their collection is available from University of Washington Press or the Seattle Art Museum store.