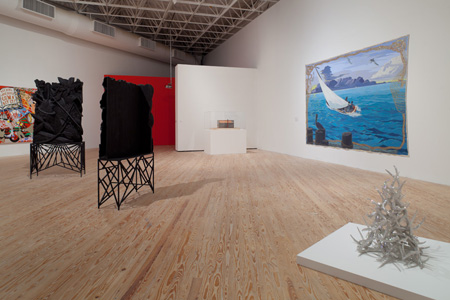 There’s talk among the “experts” that a distinctly regional voice in contemporary art is becoming more and more muffled as artists look globally for inspirational content. That may be true. But there’s a scream emanating from the Contemporary Arts Museum Houston, full of strange cadence and unfamiliar dissonance, confirming that cultural vernaculars are still very much engaged in the contemporary conversation. “The Spectacular of Vernacular,” curated by Darsie Alexander, chief curator at the Walker Art Center, explores art that exists somewhere between pop and dada, that has roots in rustic, “homespun” traditions. The exhibit addresses themes of location, ritual and “homemade” process.

Two videos tap the first two thematic components. In “Deep North,” by St. Paul, Minnesota-based Chris Larson, a strange, apocalyptic ice machine is operated by three uniformed women inside a small white house inside which every surface is coated in a thick layer of ice (the toilet, the bed, the kitchen counter, the dresser — all frozen and encrusted with icicles). The noise and rhythm of the machine (which looks like an iced-over watermill), the automaton workers and the precarious framing make Larson’s film very unsettling. Its middle-of-nowhere setting evokes not only the American North, but also Scandinavia. And the female performative aspect echoes Marina Abramovic’s “Balkan Erotic Epic: Exterior Part 1 (B).” Abramovic, a world-renowned performance artist, documented certain pagan rituals in her native Balkans, particularly rituals involving the eroticized gestures of women in folk costume, like “flashing” the gods to scare away the rain. In her film, a woman stands in a field, gazing skyward, passionately caressing her naked breasts. At first, it’s a hysterically funny image. It seems naughty and voyeuristic. But at some point, it turns achingly sad, even romantic, until it cycles into desperate, possibly compulsive behavior. It could be a yearning, as Abramovic has stated, for the sex-obsessed days of socialist Yugoslavia. And it also represents a connection to nature through sex.

A series of paintings by Jim Shaw are meant to mimic the amateur quality of thrift-store paintings while providing a narrative on the fictional cult of Oism. The images include a giant octopus, attacking a city, a car on fire in a forest, a carload of men in a drive-by mooning of a religious adherent, and a bizarre religious parade, complete with cryptic icons rendered as big, floating helium balloons. Another depicts a church ritual that resembles something out of the Dungeons & Dragons milieu. On their own, the works might be humorous or curious, but collectively they draw power from each other and rise above their folksy veneer.