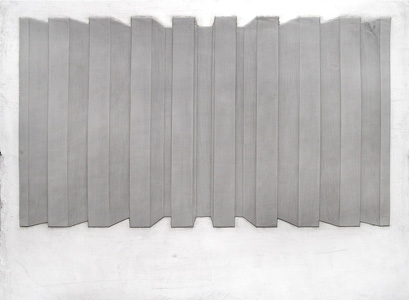 One of the great joys of being an art critic is witnessing an artist’s growth over time. Tom Miller, already a smart and technically terrific painter, is becoming an even better artist. His latest show evinces quiet confidence, intelligence, and thoughtfulness to a deeper degree than works from the past have achieved.

Using paint to create monochromatic (white or grey) relief panels that feature abstracted forms, Miller plays with the old Greenbergian notion of flatness in modern art. He says that his “two-dimensional works are as much sculpture as drawing and painting. As a result, they reside in the middle ground between physical presence and illusion.” This middle ground, or, as Rauschenberg put it, the space between art and life, makes for a fertile base wherein the tension between theory and practice can be pushed like a hot button into the work itself. Miller’s paintings have loosened up subtly, revealing ragged edges and other intriguing marks of the artist’s hand. The overall sense of the show evokes Eva Hesse’s landmark “Hang Up” (1966), in which a wrapped wood frame and wire reference painting as both two- and three-dimensional. From here, she moved into her incomparable draped, post minimalist installations. Where Miller may go from this point is something for his viewers to look forward to.