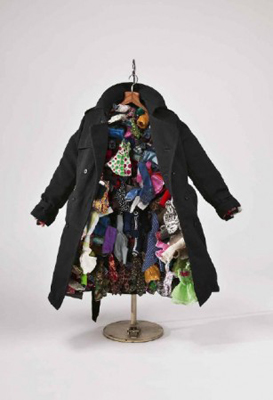 It might seem natural to categorize New York-based Charles LeDray as an artist who works in miniature, but that would be simplistic. Still, there’s an overriding fascination with the small scale in Le Dray’s sculptures and mixed-media pieces, but beyond their diminutive size they are endlessly curious, elusive and mysterious.

Unlike doll costumes and dollhouse furniture, there’s nothing precious about the tiny clothes and objects on display in this mid-career retrospective. In this smaller-sized universe innocence was lost long ago. It’s a male-dominated world of macho nostalgia, both straight and gay. Femininity exists in objects, like the several glass cases displaying tiny pottery specimens, or in the absence of objects, like “Jewelry Window,” a store window displaying black neckforms and mounts meant to display jewelry (it’s backlit and bare). “Oasis” is one of two glass cases, each displaying 2,000 small ceramic works, like little vases and urns. I tried to find a single duplicate among them. I could not.

Like other “works” in the show, these exude an all-consuming obsession (echoed in the exhibit’s title “workworkworkworkwork”). It’s both a mantra to produce an output of material and a literary image of the amount of material there is to see. “Throwing Shadows” consists of three display cases containing 3,000 little pieces of black porcelain, and it is a confounding example of that mantra. It seems unreal: The tiny bottles and vases cast shadows from unknown light sources on the white surface of the cases (almost as if they were printed on), and the reflections in the glass reverberate like visual echoes.

“Men’s Suits” is another example of stunning detail. Three rooms of a clothing thrift store have been recreated in small scale. A panel ceiling with fluorescent lights hangs above each room; you have to crouch to investigate. Racks of suits occupy one room, a necktie display sits in another, and the third is a backroom with rolling laundry bins, racks of hangers and laundry bags. Little coat hangers? Some company surely makes these for doll clothes, right? Nope. LeDray made each one by hand, and there are seemingly hundreds of them — wire, clear plastic and white plastic. The skill and dedication is staggering — as is the profound weirdness.

It takes at least two visits to really soak up this exhibit. It’s hard to walk away. Not to be missed are LeDray’s works in human bone, which he has stopped using as a material due to the dubious methods by which it’s procured. “Orrery” is a tiny and delicate model solar system, carved from bone, under a glass dome. Also terrific are LeDray’s little uniforms representing the four branches of the U.S. Military, and the witty “World’s Greatest Dad,” a black bomber jacket emblazoned with patches. Among them: “Cure Virginity,” “Desert Storm,” patches for Camel and Marlboro cigarettes, and that quintessential harem of male fantasy, the Dallas Cowboy Cheerleaders.

LeDray shrinks banalities, stereotypes and work-a-day tropes, and in so doing causes us to sharpen our focus on them. Right along with the artist’s deep ruminations, our own memories and personal histories are hidden and triggered here as well.