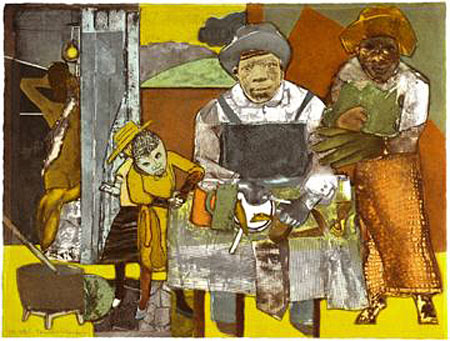 Over seventy works comprise this later-career (1960s–1980s) survey of prints by Romare Bearden (1911–88). Immediately striking is the range of subject matter, style, and process. It’s a wonderful introduction to the vast oeuvre of this widely esteemed humanist. Popular among Bearden’s subjects were jazz, theater, religion, trains and the travelers on them, and social issues. Stylistically, here we find works that are variously brushy, choppy, chaotic, crisp, cubist, textured, and flat; collage, a pursuit the artist is well-regarded for, also features heavily in the works. There wasn’t a printing process Bearden did not explore: The exhibition features screenprints, lithographs, photo projections, monotypes, etchings, collagraphs, and aquatints.

Also evident is the artist’s interest in experimentation: One group of collagraphs, for instance, was created with white liquid glue, which was left to dry; the dry glue repelled the ink to create the image. The jazz-themed etching and aquatint “Jammin at the Savoy” (1980–81) features the technique of rainbow roll inking where several colors are applied side-by-side creating the look of a rainbow.

What is most captivating in this show — beyond the fundamentals of subject and technique — is Bearden’s bold portrayal of people, and specifically his focus on the African American poor in the South. Key works here are “The Family,” “The Train” (both 1975), and pieces from the “12 Train Suite” series (1974). (It’s worth remembering that these were created not long after the civil rights movement.) All of them feature subjects who are only encountered in passing — they are moving past us in a train, or we are strolling by family members as they sit on the front porch. But their prominent, fully frontal, unwavering gazes are unforgettable; they are intensely there.

It was, indeed, Bearden’s ability bring awareness to such challenging subjects as social injustice (or such joyous ones as jazz) with strength, honesty, and respect — and without falling into easy formulas of anger or cloying patronization — that make his work so appealing. These images inspires empathy, connection. The screenprint “Roots” (1977), which appeared on the cover of TV Guide in January 1977 in conjunction with the epic mini-series of the same name, remind us of just how widely disseminated Bearden’s visual messages have been.