A Lens on the Land
SoCal Landscape Photography
Kim Beil 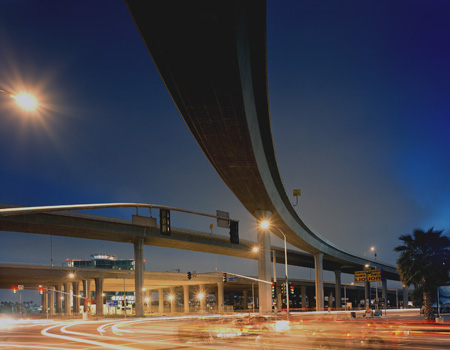 The American West has been defined by its landscape, and its landscape, in turn, has been defined by photography. While the paintings of Thomas Moran, William Keith and Albert Bierstadt already fascinated the Eastern public with sublime views of the forbidding Western landscape, photographic images produced in the 1860s and '70s were also critical to shaping the modern image of the West. The images of the Yosemite Valley made by Carleton Watkins for the California State Geological Survey reprise many of the elements featured in paintings by Bierstadt, but add to these the documentary qualities of photography. The King and Wheeler Surveys, photographically recorded by Timothy O'Sullivan, not only influenced the expectations that viewers would develop for the spare vistas and otherworldly features of the Southwestern frontier, but these less romantic, arguably more documentary images would also have a lasting impact on the practice of photography in the United States, especially in the West.

William Jenkins, Assistant Curator at the George Eastman House in Rochester, New York, noted the importance of this history to the photographers whose work he included in the landmark 1975 exhibition titled "New Topographics." The exhibition showcased ten contemporary photographers, including Robert Adams, Lewis Baltz, Stephen Shore, and Joe Deal (who was also Director of Exhibitions at George Eastman House), whose work reflected new directions in landscape photography.

Jenkins cited Ed Ruscha's photo books of the 1960s as emblematic of the issues addressed by the "New Topographics" photographers. Jenkins wrote of Ruscha's photographs, including the series "Twentysix [sic] Gasoline Stations" (1962), "The pictures were stripped of any artistic frills and reduced to an essentially topographic state, conveying substantial amounts of visual information but eschewing entirely the aspects of beauty, emotion and opinion." He clarified: "Regardless of the subject matter the appearance of neutrality was strictly maintained."

Here Jenkins invokes the apparent contradiction that is central to the "New Topographics": the style that unites these images is actually a "non-style," and dependent upon a strict "appearance of neutrality." In a 1975 interview, Robert Adams, who championed the survey work of Timothy O'Sullivan, maintained that his own images were meant to reveal an underlying form despite the "apparent chaos" of individual objects in the contemporary landscape. Of course, as photographers like Adams, Baltz, and Deal (who died in 2010) turned their cameras on the Western landscape marked by rapid development and expansion, the sheer number of images provided an anthropological kind of evidence which, despite its professed objectivity, revealed certain patterns of change that were observable in much of the American West.

In 2009, the George Eastman House and the Center for Creative Photography at the University of Arizona co-organized a re-staging of this historic exhibition. The influence of the original exhibition is near-mythic among photographers, but the rhetoric of objectivity that surrounds it remains fraught with contradiction. As Tim Davis aptly noted in his 2010 Aperture review of the exhibition, many of these images "possess a quality particular to photographs: the ability to be so clear about subject, and so obscure about meaning." What also remains abundantly clear is the degree to which this non-style is immediately recognizable and the fact that the photographers who were associated with it, despite their professed aspirations to invisibility as authors, remain central to the history of 20th and 21st-century photography. The ubiquity of these images continues to exert a powerful influence on landscape photography, especially in the West and Southwest, where the most iconic "New Topographics" images were made.

Colin Westerbeck, Director of the California Museum for Photography (CMP) at the University of California, Riverside, will revisit this history and explore the lasting impact of these images in a pair of exhibitions on view between October 1 and December 31, 2011 called "Seismic Shift" and "Aftershocks." "Seismic Shift," which is part of the Getty's sweeping Pacific Standard Time initiative, will feature 42 photographers and more than 100 images, ultimately focusing on the artists included in the original "New Topographics" exhibition. Unlike the original exhibition and its recent reincarnation, however, "Seismic Shift" will look specifically at images made in California.

Westerbeck describes his decision to concentrate on the importance that the state played in the conceptualization of the original show as a way to give recognition to the California images. Westerbeck relates, "The idea for New Topographics was formulated in California. William Jenkins came to California and met with Baltz; they talked about how many photographers out here and elsewhere were doing work in this style. The idea for the show came out of those discussions." The concurrent exhibition at CMP, "Aftershocks," deals with three photographers included in the "Seismic Shift" show, John Divola, Laurie Brown, and Joe Deal, and three whose careers are more recent, Mark Ruwedel, Michael Light, and Brad Moore.

Today, surveying the range of current photography in Los Angeles, it is evident that "New Topographics" continues to inform photographic explorations of the local landscape. The manifestation of that influence, however, is sometimes as difficult to parse as those deceptively simple photographs that first made their appearance as a unified group in 1975.

Los Angeles as a subject, both its people and places, has received considerable photographic attention since "New Topographics." Much of the strongest work in this tradition is made by insiders, photographers who have lived and worked here in the city since the mid-1970s. John Humble (born 1944), whose work was the subject of a 2007 exhibition at the Getty, has documented the city of Los Angeles in color photography since he was awarded a National Endowment for the Arts grant in 1979 in celebration of the city's bicentennial. His most compelling photographs emphasize the sometimes strange and unexpected ways that people shape the urban environment, from images of the concrete basin of the Los Angeles River to his iconic picture of a mobile home dwarfed by overhead power lines. Anthony Hernandez (born 1947), also working in color since the 1970s, has most recently explored the double impact of man on the Los Angeles River in a series called Everything (The Los Angeles River Basin) (2003-4). Though people are not often physically included in Hernandez' latest work, their presence is felt through their detritus, from cigarette butts and plastic toys to graffiti. Similarly, the work of Robert von Sternberg (born 1939) has concentrated on the intersections of man and nature. Sternberg's images of neon signs and parking lots highlight the many strange tableaux that dot the urban landscape in Los Angeles and the West. His work remains on view at LA's DNJ Gallery through March 19. The wide-ranging photographic projects of John Divola (born 1949) represent a less documentary, though conceptually rigorous style of investigation of Los Angeles and its surrounding regions. Work on his refined color series Isolated Houses, which looked at shacks in the desert, ended up inspiring an aesthetically divergent series called Dogs Chasing My Car in the Desert (1996-2001), which featured grainy black and white large-scale prints of the dogs that ran, snarling and wide-eyed, after Divola on his desert explorations. "John Divola: Present Tense," a solo exhibition of Divola's work, is currently on view at the Riverside Art Museum through April 2.

If these photographers now represent the old guard, the following five photographers, also based in Los Angeles and adjacent counties, have garnered recent acclaim for their new interventions into this well-established field of inquiry.

Alia Malley's large-scale photographs of what she describes as "in-between spaces" were seen during the summer of 2010 in the solo show "Southland" at Sam Lee Gallery. In muted tones, which are even further softened by her large-scale pigment prints, Malley's photographs depict those surprising locations where the urban and the pastoral meet in the city. Power lines and railroad tracks cut bare dirt paths through verdant undergrowth and stands of eucalyptus. Malley (born 1973) explains that she feels a special affinity with the work that "New Topographics" photographer Robert Adams did in Los Angeles. She sees in his work a similar interest in the "city and its edges, or those locations that are in-between the city and everything outside of it."

Photographer Brian Forrest (born 1951) also finds pockets of wilderness within Los Angeles. Inspired by the experience of late afternoon hiking in the Santa Monica Mountains, Forrest's images require concentrated viewing. When the sun sinks beyond the canyon walls, the deeply shadowed tangle of low-lying brush and trees are flattened and the focus shifts between fore- and background. His large-format exposures convey this incredible density of information, and the darkness of the grays and blacks in the prints (some as large as 48" x 80") aptly mimic the difficulty of seeing in the growing darkness. As Forrest himself notes, the images resolve slowly, but as one stood in front of them on view at Craig Krull Gallery in January, there was a sense of being able to
physically move around in these mysterious spaces.

Soo Kim's photographic-based images, which were on view at Angles Gallery through February, also explore the complexity of seeing photographically. As featured in the Getty's summer exhibition "Urban Panoramas," Kim's work was exhibited alongside photographs by Catherine Opie and Jeff Chien-Hsing Liao. Kim (born 1969) describes photography as essentially a "subtractive process," in which one is always framing an image, flattening out three-dimensions into two. To call attention to these naturalized visual processes, Kim literally cuts away the subject of her images. In her Elysian series, her painstaking handwork leaves the viewer only with the shadows of branches and birds perched above them. In other works, she cuts out the walls and roofs in views of old European cities like Dubrovnik and Reykjavik, to reveal the strata of landscape and architecture behind them. Layering several images together, the resulting compositions return three-dimensionality to those forms that are usually overlooked.

Peter Holzhauer (born 1978) also considers the ubiquity of photographs when he makes his own images. Holzhauer, whose work was recently included in "The City Proper," a post-"New Topographics" show at Margo Leavin curated by UCLA photography professor James Welling, notes that most photographers become familiar with famous images, primarily through reproductions. A successful image, in Holzhauer's view, must maintain its potency on the printed page. On photographing the landscape, Holzhauer says: "There's always going to be a need for really straight-forward documents of what the world looks like now, like the topographical photographs of Carleton Watkins or Timothy O'Sullivan. I think that's what photography does best." Though Holzhauer describes his own images of the landscape as "old-fashioned," they are also remarkably complex, emphasizing patterns and forms that photography seems uniquely well-positioned to represent.

Brad Moore's color photographs, while they appear to reference the style of the "New Topographics" photographers, also add an element of humanity to otherwise straight-forward images of the suburban landscape. Moore (born 1958), whose work will be shown in the CMP "Aftershocks" exhibition, recently returned to his childhood haunts in Orange County after spending twenty years away. He was taken by the changes that subtly altered the once-familiar landscape. His vignettes feature moments of synchronicity or irony in the landscape, and he represents all of his subjects, from ornamental landscaping to suburban tract homes, with the dignity of portraiture.

Many of these contemporary images can be seen as engaging with the visual language of landscape established by "New Topographics." Despite their varied conceptual approaches and new stylistic innovations, the commitment of these photographers to investigation of the city's landscape reminds us that much of what--and how--we see today remains inflected by the past.