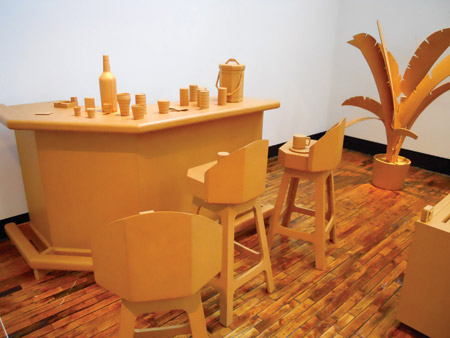 Given the way that he continuously and relentlessly looks forward, it seems strange for Roland Reiss to look back. Reiss makes objects that are smart and conceptually driven. He morphs periodically--and lately, at an increasing pace--changing media while reexamining his interests. Throughout this evolution, Reiss has consistently conveyed his desire to incorporate the world of ideas and experience into his practice as an artist and as an educator. Critic/educator Chris Miles, who calls Reiss a changeling, says that Reiss sets an important example, embodying a sense of permission for contemporary artists to pursue multiple interests and multiple aesthetic codes. "He is one among many artists and educators who opened up that kind of possibility for an artistic practice which wasn't about being enslaved to a style or a look for the duration of a career," Miles says. Reiss has "maintained his curiosity and allowed himself to change over time. And he's taken the risk of putting that out there in his work."

In addressing a major shift in his early work, Reiss stated in the 1991 catalogue for his survey at the Los Angeles Municipal Gallery that his move from vacuum-formed plastic work in the 1960s to his miniature tableau in the 1970s grew out of reflection and a sense of dissatisfaction with his direction. This September, Reiss will be looking back on his career again. This time, his impetus for reflection is the announcement of the Roland Reiss Endowed Chair in Art at the Claremont Graduate University (CGU). Over the weekend of September 10-12, CGU will commemorate Reiss' thirty years in the Art Department, an accomplishment which Miles, who chairs the Art Department at Cal State Long Beach, considers remarkable. "When I think about the many years that Roland spent chairing the graduate program at Claremont, it's staggering," he muses. "That he did it for so long and maintained his practice at the level of intensity and integrity that he did... I think it is fair to say that it is unparalleled."

CGU will announce the Roland Reiss Endowed Chair as a part of "Familiar Grounds: Celebrating Roland Reiss and Imagining the Art of Tomorrow," a multi-day symposium which will examine Reiss' legacy as an artist and an educator. The symposium will take place at CGU and a number of other venues in Claremont and the nearby Pomona Arts Colony. It includes a day at CGU--open studios; a panel discussion with CGU core Art faculty David Amico, Michael Brewster, Rachel Lachowicz, and David Pagel; a Q&A session with Roland Reiss and Chris Miles; and a public announcement of the Reiss Endowed Chair. A number of galleries in the area--notably, Andi Campognone Projects and Bunny Gunner in Pomona, Andi Campognone Projects/OBJCT Gallery at the Claremont Packing House, East Gallery and Peggy Phelps Gallery at CGU--will tie into the symposium with shows of Reiss" work and the work of many of the artists that he influenced over his career.

According to Danielle Segura, Director of Development for the School of Arts and Humanities at CGU, when she initially approached Reiss to discuss a public event, Reiss hesitated. Insisting that anything that happened had to be about more than just him, Reiss expressed an interest in using the creation of the Endowed Chair to promote the Art Department at CGU and engage in critical dialogue about art. Reiss suggested gathering friends, colleagues, and CGU alumni, and the idea of a symposium came into play. In the same way that Reiss seeks to encapsulate the world in his practice, Reiss' desire to open up the world to himself and to those around him has been a hallmark of Reiss' pedagogy as an educator.

In the same 1991 catalogue in which he ponders the evolution of his work, Reiss refers to himself as part of a collective intelligence. This comment provides a framework for his commitment to discourse and insistence on a certain type of decentralized democracy in his pedagogy. Max Presneill, the curator at Torrance Art Museum who organized the recent show, "Set Theory: Roland Reiss," has observed Reiss' approach to open dialogue for a number of years. While he has known of Reiss' contributions to developments in painting in the Los Angeles area, Presneill became increasingly aware that Reiss exerted as much influence through informal conversations with other artists as he did through the objects he made. Those conversations represent "a core aspect of Roland that has impressed many artists--the engagement with art itself and the art and ideas of others, peers or not," says Presneill.

The kind of critical dialogue that will take place at "Familiar Grounds" forms the fabric of Reiss' pedagogy as an educator. According to David Pagel, Reiss believes in open discussion and independent opinion, and this outlook affected the educational culture in Claremont when Roland arrived to expand the program in 1971. The things that attracted Pagel to Claremont--that it does not adhere to a particular look or style; that it is an open program which cultivates discussion and engagement with ideas; that everyone talks "across media, disciplines, genres, subjects, areas of expertise... has a great deal to do with how Roland set it up," Pagel explains.

Reiss' contribution to artistic practices matches the significance of his contribution to pedagogy. Chris Miles considers Reiss important to developments in assemblage, conceptual art, sculpture and installation, in addition to helping reinvigorate abstract painting in Southern California. "He has had an impact in multiple areas an artist, and also as an educator." In celebrating the legacy of Roland Reiss, who turns 81 this year, "Familiar Grounds" marks an important milestone in Southern California art; it promises to provide a unique look at the practice of an artist and educator who has influenced generations of artists.