Splatters Against the Pandemic
Column by Bill Lasarow 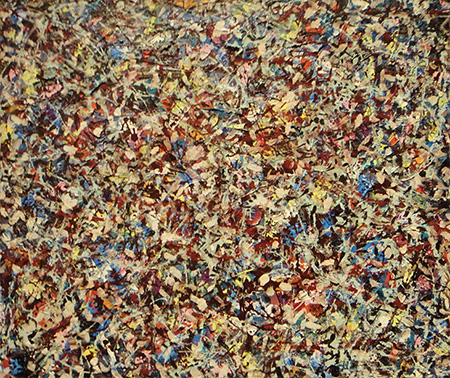 Splatter painting is a great quarantine option when you are stuck home with the kids, at least if you have the luxury of that extra room or a large backyard. The mess left around the edges, if you aren’t diligent about clean-up time (and who is?), tends to evolve into better art than you are likely to see in the play area. But the energy burn is great and making up ways to read the accidental images can bring a family together. If you can, set aside a wall just for pinning the things up, and make sure it’s in easy eyeshot of where family meals take place. You’ll wonder why you wasted time talking about what you binged watched on TV.

Of course, art history has been dotted with the products of splatter painting ever since humans figured out that pigments could be mixed with liquids and binders of various sorts and transferred to a surface with a tool. But it wasn’t until relatively recently that it got its nose under the art historical tent through finishing touches by the likes of JMW Turner and Gustav Klimt. Don’t give me Georges Seurat’s pointillism as a breakthrough, that’s basically a form of stippling. Its required closely controlled precision must always fight off tedium. If you have to pay careful attention to the placement of every dot your are living in a different world.

The leading Abstract Expressionist couple of Jackson Pollock and Lee Krasner made the breakthrough. Forget Clement Greenberg’s veneer of austere and patronizing theorizing, they and their close colleagues won over a mass audience extending well beyond the confines of the art world elite and has continued in the decades since because we can relate. If the sarcastic retort to their kind of abstract painting was “my kid could do that” resonated with some, the fact that my kid CAN do it made it both accessible and exciting. Want to be a serious artist? It was no longer required that you have Raphael’s or Ingres’ drawing skills; it became what will you do with the skills that you do have?

If the supposedly more “traditional” impulse is to control how the transfer of visual impressions take place, the complementary impulse is to move fast and let your muscles and inner feelings do the talking. To splatter is to vent. But if the initial release is liberating, its anarchy cleansing, be careful. Too much of the same descends to an empty gesture. What starts as good fun deteriorates into boring repetition.

That splattering explosion after the disaster of war gave the necessary push to bring fresh energy to pre-war modernists like Max Ernst and Joan Miro. And it opened about a million new aesthetic doors for the likes of younger artists such as Lynda Benglis, Sam Francis, Sam Gilliam, Pat Steir, Chen Yinglie and so many others. The subtext to it all: let ‘er rip, have a great time, let go of your inhibitions. The couture of an artist quite suddenly became jeans and t-shirts loaded with splatter. The splatter didn’t even need to reflect the work they exhibited because it announced that they were an artist. If the volume of such painterly activity produced the inevitable handful of genius artists, how the heck is that undermined by a technique not rooted in diligent rendering? Kids just want to have fun, and, now more than ever, I say let them. For heaven’s sake, let them.

Searching for hidden images is the most gratifying way to play out the random dots and splashes and curvy, uneven lines into meaningful visual associations. Rather than imposing one’s will on what an image identifies as, this is a game of hide-and-seek, the discovery of a thing that is already there. You don’t have to fret about its meaning because that’s buried in the media, not authorized iconography. It’s a ride that might just take you to the ends of the earth, or simply drop into your lap. It is not hidden behind covert symbols and obscure references, but a natural and inevitable product of imaginative choice. It’s the after-party that takes place after everyone has cleaned up.

If connecting the splashes and drips to form faces and mountains and histories are one path to go down, diving into the atomic particles that replicated and expanded with such rapidity that it would be a waste of time to even count them all is the fork in your mental road’s journey. Each dot or splat is different from every other one, like that old truth about snowflakes and fingerprints. Up close each micro-incident becomes its own little world. Their connections form strands of narratives and dramatic moments both common and rich. They remind us that there is more for us to do and know than we can possibly do or know if we live past 100. Surprises never end, the kids grow up a bit, and the grown-ups find that little child inside.

So splatter may open up a sea of possibility, but it also teaches humility. You know you will never be able to contemplate every painting in every great museum collection. You will not read every book available through Amazon. And you will never catch up on every movie or TV series ever filmed. There is a natural movement between the chaos of emotional release, and channeling that release into meaning and purpose. If you can do that by splattering paint around, you for damn sure can put that energy to work elsewhere.