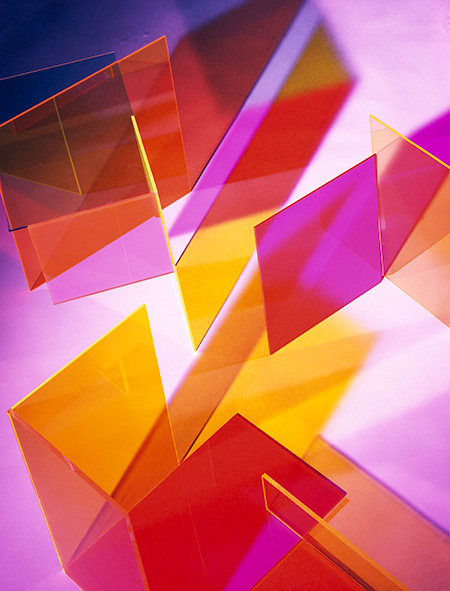 Since the 1970s, Chicago-based Barbara Kasten has been making abstract photographs by aiming her camera at sculptural and architectural constructions that she sets up using a few carefully selected materials and props. Flat sheets of Plexiglas, mirrors, colored gels and stage lights are her common tools. Working intuitively while immersing herself in a process of experimentation, Kasten moves about a studio construction as she photographs sections of it, with the goal of capturing geometric compositions that are often compared to the pioneering abstract paintings of early 20th century Russian Constructivists. As its title “Chroma” suggests, Kasten’s longstanding interest in richly saturated color is evidenced in two early works from the mid-1980s and six prints from the past few years. Although the recent works are shot digitally, Kasten still employs a chemical-based chromogenic process in developing them (as she did with the earlier Cibachromes). This allows for controlling color gradations and tones using light rather than a computer program such as Photoshop.

The earlier works from 1986 feature volumetric shapes such as spheres, pyramids and columns that occupy spaces which are made ambiguous through the use of mirrors and colored lighting. Although to some extent they recall De Chirico’s metaphysical still lives, the spatial relationships in Kasten’s compositions are far more complex and the colors are psychedelic. In the recent examples, architectural elements dominate the compositions and narrative overtones, although perhaps unintended, are perceptible when engaging with the imagery. In two photos from the “Crown Hall” series, architectural sections positioned against speckled flooring create the illusion that we are looking at the edge of a space vehicle moving through the galaxies. One photo is particularly inspiring because it goes beyond constructivism to suggest a spiritual dimension. In “Collision 6 E,” transparent planes of red, orange and magenta seem to float weightlessly in ethereal light, suggesting something powerfully enigmatic and infinite.