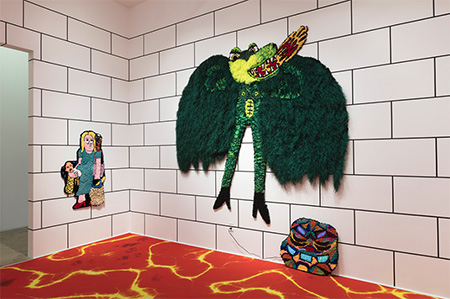 Hannah Epstein has a knack for transforming spaces. In her previous show here, “Do You Want A Free Trip To Outer Space?” Epstein filled the darkened gallery with animations and spot-lit hooked rugs depicting the adventures of her comic book hero Superchill. For this installation she also combines the tactile and the digital. “Making Bets In A Burning House” occupies two of the gallery's smaller back rooms.

In one, she wallpapers an image of white bricks onto the wall and carpets the floor with a fiery pattern of bubbling lava. Large and small-scale hooked rugs cover these faux-brick-walls, creating a melange of animal and human forms. The effect is humorous and slightly crude. In “Like a dragon unfurled its wings” a suggestive green dragon with breasts and high heels, spews red and orange flames. “Hot Girl Summer” is a scantily clad woman with bright red lips and and long blond hair — a sly twist on imagery that would appeal to video gamers. The more than fifteen works that adorn the walls and floor of this small space present a curious cast of characters.

In the second room, Epstein projects digitized versions of her characters and presents them as polyfilled objects. In the center of the room is a circular green rug on which sits a single cell phone, three red cushions, a mangled black legless chair, as well as the floppy sculpture “Soft Worm.” Although Epstein creates an environment that at first feels like it’s meant to sit and relax in, it is not that inviting. This digital fun house is ambiguous, slightly menacing and is finally worlds apart from the implied innocence of the hand-made works. The flickering animations are initially captivating, then outdone by a large flatscreen monitor that displays the goings on in the first room from a hidden camera. There’s the ah-ha moment: this work is about surveillance. The relationship between the two rooms is ambiguous, but the installation as a whole reveals the scope of Epstein's interests. She proves able to create a visually compelling experience built on a highly technical platform, yet which is as folksy as a Savannah front porch.