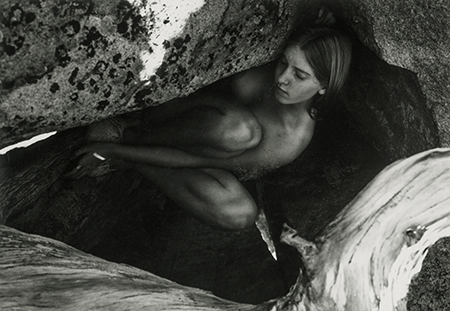 More than a survey of Francesca Woodman’s work, “Portrait of a Reputation” is an immersion into the late artist’s intrepid experiments with black-and-white photography and her idiosyncratic yet promising bursts of creativity. Generously accompanying the exhibition are photographs documenting Woodman’s short life (1958-81), taken by her friend George Lange, along with several of the artist’s letters, photographic outtakes and postcards — all of which Lange had held onto for decades. There are letters and photos referencing her accomplished parents, ceramicist Betty Woodman and painter and photographer George Woodman. Didactic material explains Francesca’s ties to Boulder, Colorado, and the Rhode Island School of Design.

The exhibition opens with life-size photographic reproductions of the windows and paper-strewn floor of Woodman’s loft, then plunges into the diverse subjects and settings that she pursued. Woodman often employed a tripod to insert herself into the compositions, primarily using a medium-format camera. The prints run six-by-six inches or slightly larger. One of the most intriguing series is one in which Woodman tries various nude poses while pressing against a large mirror or glass plate. In one series she squeezes herself into the crevice of a large tree trunk, reflecting perhaps a merging with nature or a retreat into it. Another series places her in a cemetery, wearing only a light shawl. There’s an unexpectedly lovely and intimate photo in which the back of her lace-covered torso is juxtaposed against a lace-covered stone cross.

Although it’s an affecting and poignant exhibition, we are bound to wonder: Had she lived, might her career have placed her in the vanguard of emerging women artists of the 1970s and ‘80s? The intervening decades, together with her sophisticated (for her age) development make the question worth pondering. “Portrait of a Reputation” — a phrase Woodman once scribbled on photo paper — doesn’t need to answer this to justify its place in a museum. More important is its sensitive approach in illuminating an artist’s coming-of-age, by offering a rich variety of prints that stand on their own merits. The backstory is relevant but ought not to overshadow the work.