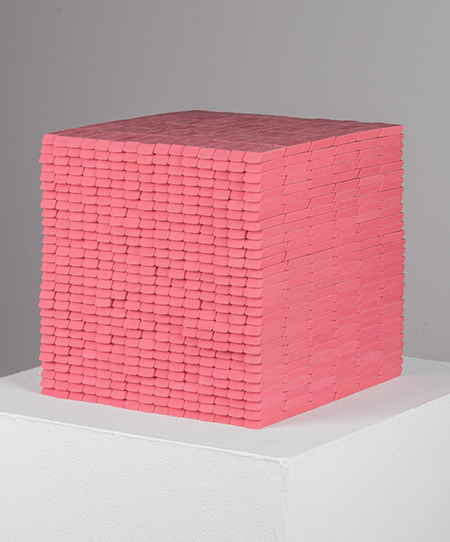 Joel Swanson investigates the complexities of language and learning without using a single alphanumeric character, but rather suggesting them. His work riffs on school-day memories that are stirred by such objects as black-and-white composition notebooks, index cards, correction fluid, yellow highlighters and — the centerpiece of the show — Pink Pearl erasers. Swanson stacks more than 2,000 erasers precisely 12 1/2 inches high in “How Many Pink Pearl Erasers would it Take to Create a Perfect Cube?” The artist is counting us to think it “an absurd waste of time,” as he says in his artist statement. Yet Swanson regards it as quiet resistance to society’s ever-present mandate to be productive.

In the same subversive vein is Swanson’s series of nine works on paper, which suggest nine pages culled from classic high school literature. No text is present, yet the pages have been “highlighted” almost entirely with yellow paint made from the chemical pyranine, the yellow dye used in those familiar highlighters. There’s a suggestion of toxicity — and by extension, a critique of learning environments — in “Unrecognizable Letterforms (Alphabits),” where fragments of the well-known kids’ cereal have been recast in lead and arranged into a tidy array. With its deliberate play on mundane education-related objects, “Eight-and-a-Half-by-Eleven” manages to be incredibly cohesive in its messages about over-standardized ways of learning, the difficulties of language acquisition and learning to write, and the intersection of language, culture and commercialism.

A concurrent show, Cody Hudson’s “I Came Home,” is a pleasant diversion into abstract acrylics on linen. The works have a consistent palette of brown, teal and rust that suggest landscapes, cityscapes and the night sky. A group of Hudson’s small, blue steel sculptures mimic the whimsical shapes that populate the paintings. Its playful wit makes for a harmonious show and a worthy counterpart to the Conceptual rigor of Swanson’s works.