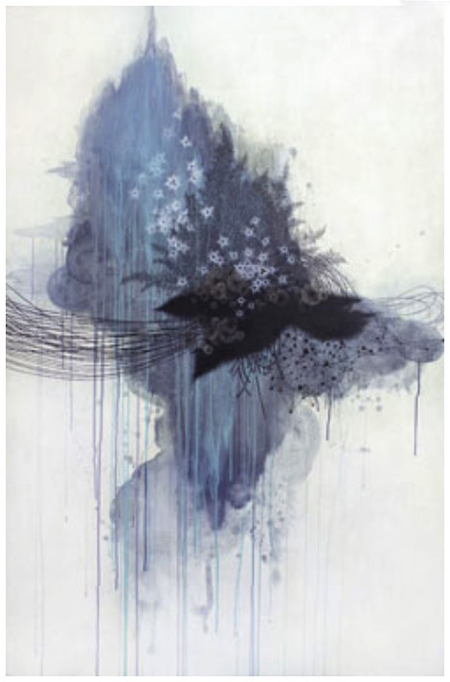 If you consider abstraction’s two poles, the geometric/iconic and the organic/painterly, the modestly scaled acrylics of Seiko Tachibana, with their crisply meticulous facture, simplified forms and subdued palettes would seem to be firmly on the minimalist side. But there’s an understated lyricism and poetry to what starts out as reductive work. Perhaps because of her Japanese upbringing and sensibility they become intimate and human, a far cry from the polemical, assertive (in color and scale) hard-edge paintings associated with their 1960s-era antecedents.

In the twenty-five works included in “Connection,” all entitled “spatial diagram” and assigned a number, Tachibana explores the circle motif — not the calligraphic enso of Japanese tradition, but the flatly painted disc, or ring, which are combined with others done in different colors or tones. The configurations, suggests ripples, blossoms, constellations, and even those sub-atomic solar systems of protons, neutrons and electrons. Some of the circles, arrayed in grids, suggest the columns of pre-modern architectural church plans. Tachibana’s brand of minimalism is allusive and expansive. Three 30-inch-square paintings entitled “spatial diagram” present globular clusters of discs that suggest marbles or gumballs. Among the eleven 12-inch-square paintings are five nocturnes: spherical clusters set against dark skies, the big bang glimpsed in a microcosm of dandelion seeds.