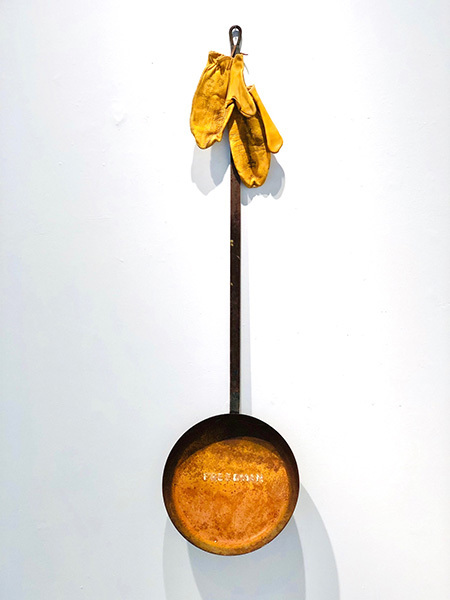 Each new body of work Ann Johnson creates seems to have a fresh focus, and “Acknowledge” is no exception. These new mixed-media works focus on slavery and its continuing consequences. Trained as a printmaker, Johnson constructs assemblages that incorporate printed portraits of anonymous African Americans, friends, relatives or someone she chooses to honor. For “Manufactured Realities,” she incorporates branches laden with cotton bolls. On one she has printed a portrait of a black man. In the south, cotton immediately conjures an historic relationship to slavery and depictions of slaves spending long days toiling on plantations. This “bouquet” of cotton branches is placed within a white ceramic jug on which Johnson has applied the likeness of a young black girl holding a white baby almost her size, implying that it is her task to care for him. For other pieces, Johnson utilized elaborate antique frames or vintage boxes. In “Treasured,” a wooden box with a drawer holds images of a family printed on raw cotton. A young black man is on the lid, while a mother and child are tucked safely inside a drawer. In this piece, the cotton symbolizes the fragility of the family unit and how quickly it can be ruptured through the sale of property or death.

Several pieces in the show contain images printed on gauze with what appears to be blood. “History of Gynecology III” is a box construction that references medical experiments that were performed on female slaves, sometimes resulting in death. A sobering piece, it ironically includes an American flag, a Purple Heart and a George Washington quarter. Two other box constructions display small Aunt Jemima-like figures. “Freedman” is constructed from an antique rusted skillet with a handle nearly four feet long. Attached to the top of the handle is a pair of worn work gloves, and inscribed onto the face of the skillet is the word FREEDMAN. It’s a form sufficiently eccentric to elicit laughter, even as its pathos is self evident and serious.

Since 2015, Johnson’s work has responded to the seemingly endless stories of police brutality toward African Americans, as well as the ongoing inequality of women, black women in particular. Prior to this, she was printing portraits on dried tree leaves and hanging them on tree branches, which gave them an ephemeral quality that evoked associations to the history of domestic terrorism more powerful precisely due to their fragility. Increasingly Johnson has voiced in her work a responsibility to raise awareness of the racism that exists in American society today less to express outrage than to inspire us to investigate these complex and unresolved issues within ourselves.