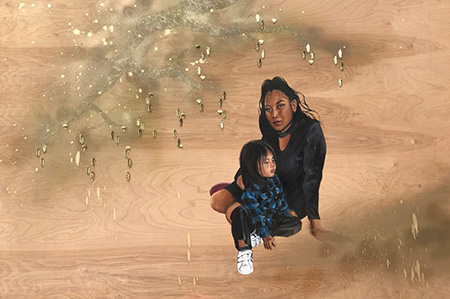 Two portraits on opposite walls draw us into Shizu Saldamando’s world, a place where human experience is rich and varied, and people aren’t defined by what surrounds them. Most prominent is “Grace and Ira, Golden Hour At and Despite Steele Indian School Park,” a portrait depicting a young mother and child seated together, surrounded by negative space, a swath of gold glitter and small leaves that shimmer across the warm, rich wood that envelops them. The artist drew her subjects, both Native Americans, from time spent playing on the grass at the site of a former Indian boarding school, now a city park. Although each of the artist’s subjects bring a specific individual history that intersects over time with a shifting cultural context, it’s only revealed through text panels or conversations with the artist. Saldamando grew up in the Mission District of San Francisco and now lives and works in L.A. Encountering the paintings and drawings that anchor this exhibit, which also includes two videos, viewers are left to construct their own ideas about the subjects’ identities and circumstances — now, in the past and into the future.

Exhibition materials explain that the artist works primarily from snapshots, focusing on “often-overlooked communities of color,” including punks, queers, activists and artists. Her portrait of hardcore punk musician Martin Crudo, bare-chested and dressed in a cap, suspenders and massive blue tulle skirt, hangs across the gallery. Titled “Martin’s Cincuentañera,” it depicts Crudo appearing to ride a giant wave of freedom, strength, and joy. At times these portraits, including graphite on wood pieces and colored pencil on paper works, scream. More often, they whisper. Each conveys the power Saldamando’s subjects possess to shape their own evolving identities and tell their own stories. They’re real and regal, a stark contrast to traditional portraiture that often sought to homogenize its subject, elevate their social status and embrace the status quo. We may gaze upon those around us. But this exhibition asserts that our gaze can never define them.