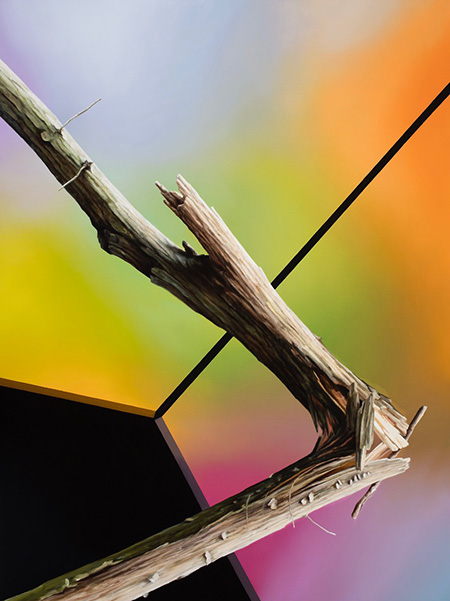 Motivated in part by the death of his father, new paintings by Mexico City-based Javier Peláez are potent reminders that there is some truth to the ideas that every cloud has its silver lining and that happiness follows despair. Entitled “Broken Tree,” the exhibition is comprised of expertly crafted abstract and semi-abstract oil paintings on canvas, paper and metal which are dominated by ultraluminous pastel colors that, in spite of the work’s sober subject matter, convey an overall tone of hope and optimism.

Peláez’s formal vocabulary is often linked to vaporwave aesthetics, a sensibility that emerged in the late 20th century and is characterized by abstract fields of psychedelic colors common to consumer and internet media. In most of the new paintings, Peláez’s images appear superimposed over or immersed within amorphous fields of fluorescent sherbet-like color clusters akin to what is ubiquitously found on a computer screen. Another feature of vaporwave aesthetics, which is particularly popular in Japanese anime and advertising, is the use of stick-like calligraphy. Peláez’s connection to this format is most evident in his “Split Triptych,” a left-to-right tripartite work on paper where a vertical white line floating in open colored space moves panel to panel from being upright to broken to being separated into two units.

In the “Broken Tree” series, splintered and bent tree limbs symbolizing the demise of the artist’s father cohabit with transparent intersecting geometric planes that allude to his father’s profession as an architect and Peláez’s own background as an architecture student. In the more maximal works, a multitude of intersecting triangles immersed in fields of brightly colored light yields an ebullient prismatic effect. One of the most striking examples is the relatively minimal “Broken Tree #6,” where the composition is reduced to a foreground, middle ground and background. A splintered tree trunk depicts every detail with a careful meticulousness that conveys the artist’s reverence for the beauty and fragility of all living things. Behind it is a simply defined architectural space. In the background are the distant, colorful metaphysical spaces that we presumably encounter when the soul leaves the body. Using a contemporary visual language, Peláez effectively resurrects ideas espoused in the historically celebrated paintings of the German Romantic painter Caspar David Friedrich, whose works were representational but similarly symbolized life’s journey with stoic acceptance of its inevitable cycles.