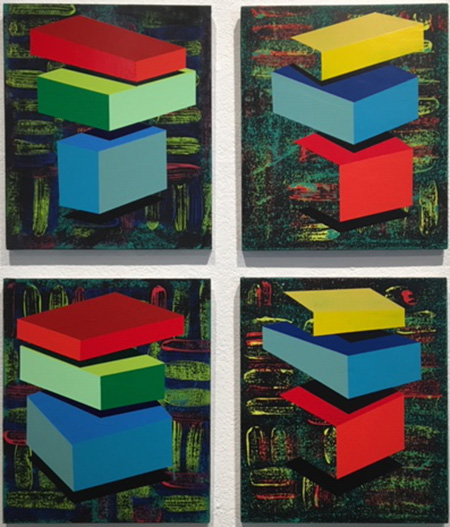 “Two•cubed” conceptually examines the places we live in, work in and spend time in from two different artists’ perspectives. This intermingling of abstract paintings by David Michael Lee with figurative ceramic work by Beverly Jacobs demands time and attention to fully comprehend. The artists are saying in their own ways that the dwellings we spend time in do not necessarily support our creative and nurturing needs. Rather, they are boxes that simply protect and shield us from the elements and from the outside world.

Lee, whose art studio is a smallish shipping container located on Catalina Island, considers in his work the confining spaces that we often inhabit. The paintings from his “Avalon Series,” begun in 2016, are executed mostly in greens, blues and aquas, reflecting the popular exterior colors on the island. These painted cubes of varying sizes and shapes, many of them stacked, are displayed alongside works comprised of small squares, stripes and hexagons. Often employing the hard-edge principles of geometric forms, with titles as “Cubes in the Garden” and “Cubes Stacked at Night,” Lee’s works describe a world that is running out of space, one in which people are living and working on top of each other.

Jacobs lives in Irvine, where much of the architecture is homogeneous. Her deftly crafted work investigates these less than perfect homes. Basing most of her work on the form of the cube, she cajoles that shape to imagine homes that contrast with the tract dwellings near her neighborhood. The title of one work, “There was a crooked house/Don’t let the rain come down”is a description of the piece. “This Ole House,” drawn from a popular Rosemary Clooney song of 1954, falls delightfully apart. And in “Three Little Pigs,” two houses on a platform, one of straw, the other of sticks, are demolished, presumably by the big bad wolf; while the house of bricks is predictably solid and secure.