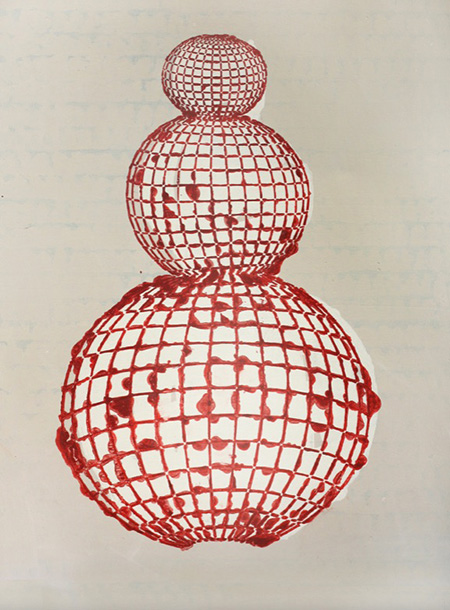 Ward Schumaker’s abstract paintings on canvas and bound books of paintings on paper — all in acrylic mixed with bookbinders’ wheat paste — have been quietly amazing us for years. The new show is endowed with the inscrutable and title, “Spyder Gears + Identity Maps.” I’m not sure what that means, and was unable to obtain clarification, but it doesn’t matter all that much. A year after Schumaker’s enthralling, comic show of painted Trump quotations, hung the month before the 2018 midterm elections (and preserved in a book for a more literate, discerning posterity), perhaps a dignified silence is in order.

Two large 60 by 70 inch paintings, “Spyder Gears (with words),” and “Spyder Track (without words)” introduce the show, which includes thirteen medium-sized works on canvas and fifteen little 10 by 6 inch works on cardboard. The first of the large paintings features text rendered in capital letters framing an image consisting of a rectangular matrix of connected squares and equilateral triangles composed of black and light gray lines, all set against the tan background that underlies the text as well. Both the drawing, which suggests Buckminster Fuller geodesic domes and Islamic architecture, and the lettering are stenciled. The ‘mistake’ blotches, where the paint has seeped beneath the stencils, lend his characteristically handmade look to this gigantic book spread. The text in the first painting recounts how the narrator, who has unaccountably defecated in his pants on a stultifyingly hot summer day, stands in the family toolshed and has a visionary epiphany: “I stood there naked (anyone could’ve seen me), listening to the flies, the grasshoppers in the weeds, the birds in the trees. But I could hear something else, too: the planets moving around the sun and the earth turning beneath me and somewhere deep inside the earth, the things that make it turn: metal gears, giant flywheels, huge watchworks.” The second painting, sans text, is even more book-like in appearance, with tall blocks of polygonal mesh, now vertical in format, on facing pages, separated by a band of light brown running vertically down the middle, like the gutter of a book.

Six of the other works continue this book-layout format, with imperfectly symmetrical arrays of golden text, hieroglyphs and archaeological plans. Rectilinear doilies, damaged by time or deliberate handling, are mounted to black or crimson backings. Five more paintings depict symmetrical, pyramidal stacks. “Venus” is comprised of three gridded globes, like a snowman; a male counterpart of stacked cubes, in “Trust Me,” includes a deadpan voiceover stenciled at the bottom. In “Make Your Life Better,” an elevation/side view of what resembles a Gothic bell tower, is made of what appear to be oil barrels. It’s a show worth seeing in pursuit of your own particular epiphany.