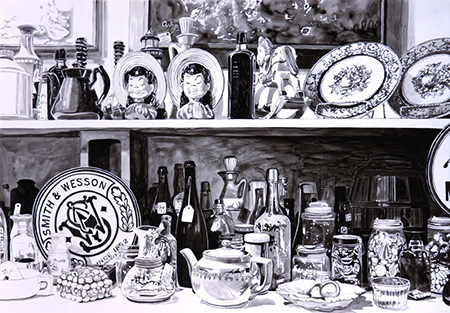 For viewers familiar with Sherrie Wolf’s opulent still lifes, her latest exhibition, “Found,” will prove revelatory for at least three reasons. The exhibition is so titled because, rather than painting objects she has meticulously arranged in her studio, she’s painting from photographs of things exactly as she found them during her travels through the United States, the United Kingdom, and France. Second, in place of her customary vases, bouquets, and patrician backgrounds — often appointed with historical paintings — she culls her new subject matter from flea markets and antique stores, lending these pieces a homelier appeal, as in “Portabello VI” and “French Market III.”

Paintings such as “Found Still Life I” and “II” include bric-a-brac redolent of the Main Street/Route 66 era of classic Americana, a pointed contrast to the stately luxuriance of her more typical paintings. The final and perhaps most dramatic difference is that this series is painted exclusively with black acrylic on white yupo paper. One misses Wolf’s sumptuous color only briefly before sensing a different dynamic at play: a kind of X-ray vision into the “bones” of these objects, undisguised by the “skin” of color. As Wolf told me in a recent interview, “I love color, but the first thing I see whenever I look at the world is pattern, shape, and value ... so [these works] show the way I think when I look at the things I love.”