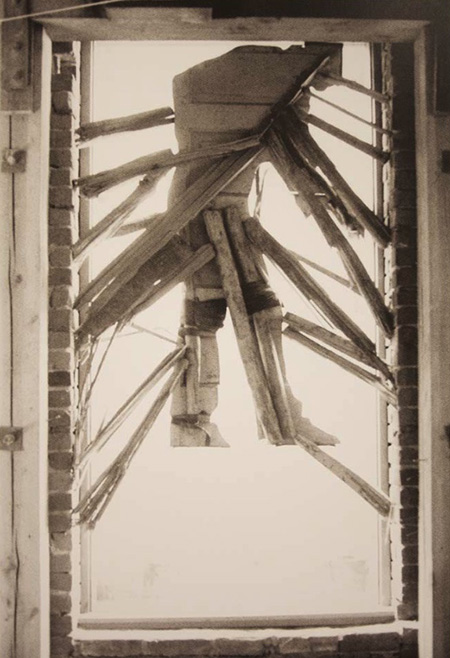 I did not believe all the prophecies and prognostications about the impending artist-quarter demise coming from the Belltown storefront artists, so-called because they lived behind the storefront display areas used as stages for their various public art projects. Mostly north of the Pike Place Market, I had subliminally perceived these even before I knew what they were. In fact, in apprehending them from the #18 bus, I was being captivated by the clever, backdoor aesthetic of an artist couple, Buster Simpson and Chris Jonic. Their sawed-off, recycled-door silhouettes and fading blueprint posters of old, hobbled figures visualized the displaced occupants of all the downtown SRO (single room occupancy) hotels which were being razed.

Their work correctly anticipated what was to come, but the disappearing epicenter of Seattle's nascent contemporary art scene happened over a period of time. The ferment of the redevelopment within Pike Place Market and Post Alley catalyzed the art of Simpson and Jonic. Their invented persona, Urban Woodman, appeared as a ghostly silhouette in Post Alley, plastered with wallpaper glue to walls and doorways. As the cyanotype inks faded from exposure to the sun, the image of the displaced recycled Woodman began to vanish until, finally, the paper itself, like the neighborhood it was presciently memorializing, had irretrievably decomposed.

The five to ten years before the reconstruction of Belltown (from Denny Way to Stewart St. running north to south, and Sixth Ave. to Western Ave. going east to west) were a period of explosive creativity among rock musicians, visual artists, poets, booksellers, art dealers (for example Crew, Traver, and Rubin Mardin), chefs and bakers. Though this is mostly forgotten today, the late novelist Kathy Acker poetically evoked the scene in her 1982 novel "Great Expectations."

The small artist-run restaurants, galleries and what-not shops became magnets for a range of art vagabonds, some of whom were like the late Brooklyn-born photographer Gerard Albanese, one of Diane Arbus' last workshop students and a close friend of another New York photographer, Lisette Model, considered the godmother of street photography. Albanese quietly took it upon himself to capture and chronicle the double street life of Belltown: sleepy storefronts by day; rowdy sidewalk malls of male and female hustlers at night. Word had it that, at that time, one of them was future Nirvana frontman Kurt Cobain. I swear I recognized his face on a poster for the group: the blonde kid standing night after night in a doorway of J. C. Penney on lower Second Avenue. Before he became a rock legend, he was a teen hustler in Belltown. In 1983, filmmakers Martin Bell and Mary Ellen Mark, creating their Academy Award-nominated documentary "Streetwise" on the same block, filming while hiding in a van, sent assistants to warn off Albanese. "But this is my block, too," he told them. This was where the Seattle Art Museum now stands.

Before I progressed to the longer prose forms of monographs and catalogue essays, I hoped that my writing style, like Frank O'Hara's, would grow out of the improvisational, make-do aesthetic of Belltown artists like Simpson and Jonic, Albanese, and another artist-couple, Sheila Klein and Ries Niemi. Their annual Belltown Yard Sale amounted to the first Seattle art fair. I purchased Dale Chihuly's "Navajo Basket Cylinder" for $5.00, courtesy of Simpson's second-hand outlet Free Advice Consulting Co. One block away on Second Avenue was the first espresso bar, Café Septième, opened by Kurt Timmermeister, freshly returned from a patissière apprenticeship in Paris. (He is now a restaurateur and cookbook author on Vashon Island, Washington). Another restaurant, Belltown Café, hired artists for kitchen staff and catered to them with low-cost meals. Every Groundhog Day, Simpson joined owner Ben Marks (who subsequently became an art dealer and, after that, an art critic) in creating a giant "root pie" (free slices for the entire community) made of turnips, potatoes, carrots, parsnips and other tubers. I still make it every year on February 2.

Belltown Café was one of three neighborhood venues, including the Virginia Inn (which had replaced the Comet Tavern as the artist hang-out of choice) and Two Bells Tavern (another pub where artists were welcome before and behind the counter), where I curated three "salons des refusés," in 1983 mostly for artists not included in local museum exhibitions. It was a huge success. By the end of the decade everyone was gone. The early restaurants and galleries had closed and the art scene had moved to Pioneer Square. The artists mostly disappeared or moved to New York — where most of them were never heard from again.