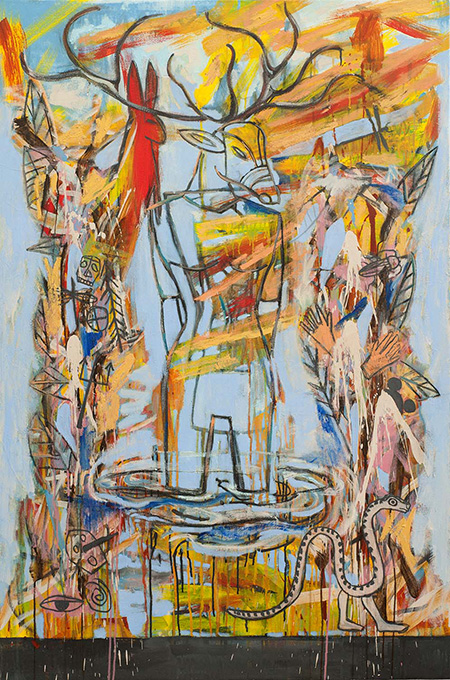 It is with both veneration for her Native culture along with her interest in multicultural intersections that Jaune Quick-to-See Smith tackles controversial, topical subjects with utter confidence in the power of storytelling. An example is “Sissy and the Plutocrats” (2012), in which Smith takes a cue from ancient Greek storytellers to portray a Native American woman uselessly pushing a shopping cart — Sisyphean-like — up a mountain of groceries suggestive of comfort and wealth. In this and other works, the canvases brim with symbolism, metaphors, conflict and scene-setting. She also imbues an element of moralizing, compelling us to think about sociopolitical issues that are often overlooked. Not surprisingly, a frequent topic is the United States’ history of mistreatment toward Native Americans, but even with such a charged subject, Smith often employs irony and sarcasm rather than confrontation and guilt.

“In the Footsteps of My Ancestors” is a stellar survey of Smith’s long career, including more than 40 paintings and works on paper. The show debuted in 2017 at the Yellowstone Art Museum in Billings, Montana — a fitting location given that Smith is a member of the Salish-Kootenai Nation in Montana. It is scheduled to subsequently travel to Colorado Springs Fine Art Center and the Tacoma Art Museum. The show currently appears in the small city of Loveland (about an hour north of Denver) thanks to curator Maureen Corey’s longtime interest in Smith’s career. Laudably, the survey makes the breadth of Smith’s politics and activism clear: the subjects range from commodification of Native lands, appropriation of Native culture, threats to the environment, the 1990s war in Iraq, female empowerment and the cycles of life, to name a few. The exhibition is organized around themes that recur in her work, including conflict, compassion, womanhood, mortality and identity.

Smith’s career took off in the late 1970s, about the time she based herself in New Mexico, and over the years her brand of American modernism has been spotlighted in more than 100 solo exhibitions. A self-described “cultural arts worker,” Smith, now 78, is a popular speaker, curator and writer. She’s considered a trailblazer for Native American women artists. Just as important, by frequently pointing out the disconnect between American contemporary art and indigenous viewpoints, Smith has helped promote inclusion of the Native American vision in contemporary mainstream discourse.

Smith’s idiosyncratic style encompasses pictograms, animal imagery, rudimentary human forms, death symbols and other mark-making elements, all executed through complex layering — messages unravel slowly as we scan a canvas. Often Smith works in collage, incorporating not only newspaper clippings and blocks of text, but also old photographs, cartoon drawings, fabric swatches and found objects. Some areas of her canvases contain thick brushstrokes, lush and earthy, but most areas are crowded with Smith’s cultural and political references. Some elements — such as appendages and skulls — float in space, while other imagery seems purposely trapped in corners. Especially striking are the canvases using large, pictogram-like images of horses or other animals to anchor the composition, while various enigmatic images swirl around them. For instance, “The Swamp” (2015) acknowledges women as life givers and protectors, with its half-elk, half-female figure as the central element in a swamp-like yet flourishing ecosystem.

As for political commentary, the exhibition includes “Shock and Awe” (2011), a reference to nighttime carpet bombings and civilian casualties during the Iraq War. A brown torso floating above a mound of skulls holds a child swaddled in red, amid glyphs representing explosions. “Tongass Trade Canoe” (1996) stretches to 150 inches, giving Smith ample space to impart an environmentalist message about threats from oil drilling in the Tongass National Forest in Alaska, home to several Native tribes. Collaged elements include an Inuit poem and newspaper headlines alluding to greed. By perching eight dime-store plastic baskets atop the canvas, Smith makes us question whether such petroleum byproducts are worth the price of endangering the land. “Trade Canoe: Don Quixote in Sumeria” (2005), even larger at 200 inches, uses a similar conceit to present various metaphors for death and war while referencing Picasso’s “Guernica.” In both cases, the culturally important canoe serves as a literal and figurative vessel from which Smith’s symbols, pictograms and text burst forth in an organized chaos.

The survey also includes an example from Smith’s “I See Red” series, which she began in the 1990s to bring attention to the commodification of Native American culture and the persistent stereotype of the “red Indian.” There’s a lighter mood in the lithograph “The Survival Series: Humor” (1996), where cartoons and text blend Borscht Belt humor with the traditional Coyote story of Native culture. In other works, Smith inserts text for the sake of puns, wordplay and satire.

With the current national discussion on “decolonizing” museum collections and exhibitions — in other words, doing a better job of bringing in work by historically marginalized artists such as Native Americans, blacks and Latinos — it’s critical to remember that Smith has fueled that conversation for decades through her art and activism. Her ability to convey stories that strike a nerve with all kinds of audiences is a testament to her influence.