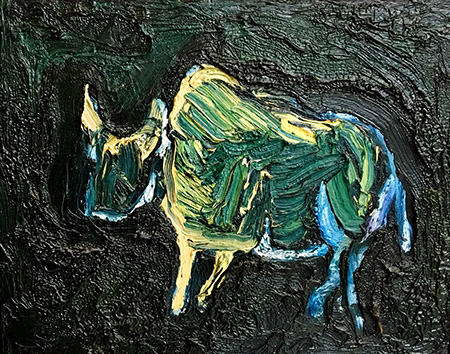 If you love art and have even a modest collection, chances are you’d have a hard time saying which piece is your favorite. It’s like being asked which of your children you’re fondest of. “I love each of them differently,” is the common answer. There are different reasons to cherish works of art. You may look upon a piece with special fondness because a cherished friend or relative gave or bequeathed it to you. Maybe you have a sweet spot for the first piece you ever bought from a gallery. There is, after all, a pride of ownership that flows from pulling out your credit card and committing to an artwork that’s passed muster with a gatekeeper you trust. Perhaps you prize a piece you bought as a souvenir of somewhere you visited — ergo the cottage industry for Cape Cod maritime idylls, Key West tropicalia, and Frederic Remington knockoffs in Colorado resort towns — to say nothing of Scottish castles, Chinese pagodas and Machu Picchu’s verdant peaks, complete with llamas grazing contentedly.

I know how it is to sentimentalize artwork that evokes a sense of a place. In the early 1990s I worked as a television reporter in Mississippi. Many a weekend I would drive down to New Orleans for a dose of jazz and zydeco, Creole and Cajun comfort food, and above all the French Quarter itself, jasmine-scented, resplendent with wrought-iron balconies aflutter with rainbow flags and fleurs-de-lis. I coveted a print of the Vieux Carré I saw in a shop window on every visit but could never rationalize spending $150 to buy such a “luxury” on my cub reporter’s salary. I still think about that print.

There are a hundred other reasons to love a sculpture, a new-media work, a silver-gelatin print. It might remind you of a heady time of life, an ex-partner, somebody you were once inseparable from but don’t see much anymore. Perhaps you purchased a choice piece at auction and felt the twinge of status and prestige. There’s an excitement, too, that comes from buying a piece by a famous historical or contemporary artist. One of my friends owns a Josef Albers print. When she showed it to me for the first time I could sense not only the admiration she felt for the piece, but also her pride in the fact that she bought it. She owns it. Her personal narrative intersects with Albers’ in a small way that is nonetheless meaningful to her.

Then there is the thrill of the first. Many of us grew up with posters in our rooms: Monet, M.C. Escher, maybe Shaun Cassidy or Farrah Fawcett back in the day. It’s a kind of graduation when we buy our first “real” work of art, something that hopefully does more than fill wall space. Like a first kiss, that first unique work leaves an impression. Over the years I’ve picked up some pieces that I adore, but none gets at me as sentimentally as the first painting I ever bought.

In March 1998 I was in Santa Fe, lunching at a place called Atomic Grill, which had a show up of paintings by local artist Selena Engelhart [http://cmcm.tv/gallery/selena]. Right above my table was an 11 by 14 inch work on canvas, “Night Buffalo,” whose eponymous bison stood alone and implacable in a field of inky impasto, rendered in an elemental style that evokes the cave paintings of Lascaux. I found myself reading all kinds of symbolism into Engelhart’s strong, slashing brushstrokes. To me this was no mere animal, but a stand-in for the individual soul asserting itself against the encroaching darkness of nonexistence. This was not just acrylic on a substrate; it was a cri de coeur. It was also $450. I left Santa Fe without it, but it haunted me as the New Orleans print had several years earlier. Eight months later, on my next trip to Santa Fe, I stopped back by the Atomic Grill, which had a different artist’s exhibition up. I asked the proprietor about Selena Engelhart, and he gave me the artist’s contact info.

Later in my hotel I nervously dialed her number and asked if the piece I had coveted was still available. The next day we met, I handed her a check for $450, and she entrusted me with part of her soul.  It has traveled with me from my late 20s into my late 40s:  six moves, a career change, a divorce, new relationships, and more art seen and words written than I could count. Today in my cramped apartment in southeast Portland, I sometimes place a candle underneath the painting and watch the light flickering across the picture plane like torchlight on a cave’s walls. The buffalo and I have an understanding. We’re in it for the long haul.