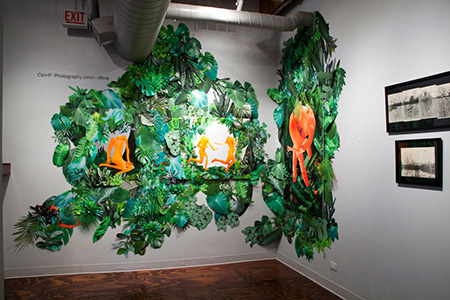 Among a lush frame of greenery, the tumbling, cavorting pink bodies of Kelly Catarino’s “Garden” suggest a carefree, pre-apple Eden. However, a deeper look reveals that neither the figures nor grounds are as they seem. Embedded beneath an installation of cutout images of fake and real flora are a series of three rectangular photographs, themselves depicting this same sort of collaged assemblage. Likewise, Catarino’s figures in those photos are like shadow puppets — compilations of parts, with flat, headless torsos overlapped with limbs at the joints.

In this exhibition, Catarinio creates a remarkable range of visual space with shadows and volume, both real and illusionistic. She also mines the conceptual territory between documentation and the potential for manipulation inherent in photography. With these photographs of photographs, any semblance of reality is ultimately a delicately constructed mirage, underscored with a tenuous feeling as though this carefree vignette could be dismantled and scattered at any moment.