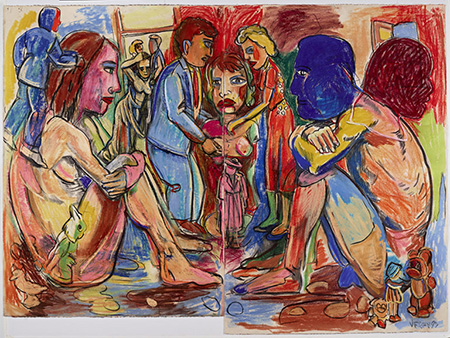 Little is known about the years Viola Frey spent in New York City when she worked in the Museum of Modern Art’s business department; this highly selective survey of works borrowed from the artist’s posthumous foundation makes one want to know more about the historical sources of so many of the drawings and smaller-scale sculptures on view. For someone who also had ties at one point to the National Manufactory of Ceramics in Sèvres, France, Frey was utterly cognizant of all the art-historical sources for the oft-vilified figurine, but this never stopped her from re-inventing it with great verve and forethought.

“The Future of Yesterday” is Frey’s expression, through her multi-faceted art, that yesterday’s junk is tomorrow’s monument. Her not-so-veiled references to kitsch and Proustian evocation of flea-market knickknacks serve as powerful memory triggers — think Grandma’s tea set or Boehm birds. This drove all her bigger-scale, gigantic nine-foot-high sculptures as well as her most intimate, subjectively composed still lifes, now left for us to interpret and unravel, much as Old Master Flemish and Dutch “vanitas” paintings symbolized mortality, pleasure and middle-class consumption. Knowing Frey to be exceptionally cultured and cultivated, these estate pieces offer us plenty to chew on.

As is the case with her frenemy, fellow Bay Area figurative clay sculptor Robert Arneson, Frey’s star is rising again with new publications and museum surveys planned. However, compared to Arneson (who died in 1992), Frey (who died in 2004) remains somewhat eclipsed by her colleague, in death as in life, a fact (which she freely confessed to me in an interview) that troubled and infuriated her. There is not, to my knowledge, any full-scale biography of Frey currently planned, such as the one that appeared on Arneson in 2013.

Frey’s larger-scale pieces and her adventurous range of subjects are not the subject of the current show. What we get instead are flashes and sidelong views of the bigger works planned and executed out of sight. Made between 1975 and 1997, we glimpse the burning intensity to which color may be deployed as emotional metaphor, as in “Figure on Knees with Head Down” (1986), a pure American Expressionist sculpture. Nodding backwards again to art-history, the large-scale pastels echo German Expressionist Max Beckmann’s American period, but without his sense of political foreboding and collapse. Patty LuPone seems to star center-stage in “Western Civilization Diptych #1” (1997), bookended and trapped by a seated male-female couple who glare dumbly past one another. Making her eventually ubiquitous self-portrait appearance à la Hitchcock, Frey’s silhouetted head with a bun hair-do stares out of the frame.

If anything, it is Frey’s internal world of collecting, obsessing, brooding and ultimately angry activities that populate her crowded compositions. “Untitled (Studio Model Series)” (1990) is filled with symbolically loaded figurines that she shoves in place beside a nude studio model who simultaneously chases a blue-suited businessman while carrying on her back a wooden anatomical male model. “Greek Hag, Brown-suited Man” (1990) pits the “Venus de Milo” against the intrepid businessman and seated nude studio model who, in turn, is contemplating piles of toys and dolls on the floor. Could the barely visible black nude silhouette in the upper doorway be Frey? These are not secrets of foreign policy or outrage à la Arneson; they are unanswerable puzzles more akin to Sylvia Plath or Emily Dickinson. Viola Frey was the terrible Cassandra of her own world.

That’s not to say that the smaller, table-top works like “Woman in Long Dress” (1995) or “Seated Man with a Hand” (1975/1999), the latter barely two feet high, don’t have a considerable power of their own. Fathers and daughters dominate each, a dyad repeated and revenged by Frey over and over, here “protected” by avalanches of cheap collectibles, “transitional objects” meant to replace parental love with interchangeable commercial sentiment. Executed in coldest white and ivory, the reigning suburban executive in the easy chair is surrounded by his own crumbling world of belongings. Frey, in this sense, is akin to a novelist as well as a poet: she makes storytelling the vehicle for her imaginatively twisted world-view.

Finally, reinforcing her interior world as subject, the four-by-five-foot pastel “Artist’s Mind/Studio” (1990) is explicit about Frey’s projecting other bodies and objects as surrogates for her own desires: two men, two women — parents? grandparents? lovers? — all hovering above a helpless nude child in the picture’s lower central foreground. In the upper right corner, another nude is opening a door or departing, announcing or just observing Frey’s enigmatic but unignorable clashes of color, juxtapositions of people and things, and the hectic, lively character of art that will remain dynamic and compelling for decades to come.