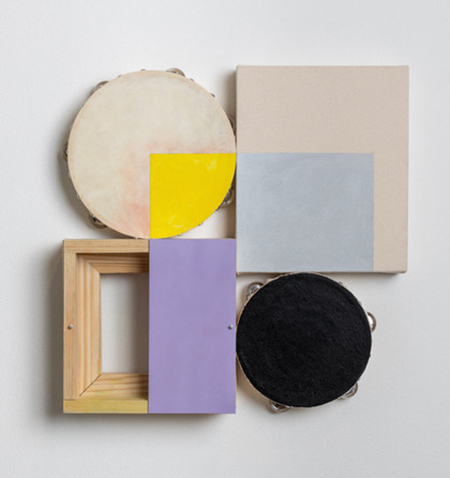 In his latest wall-mounted series of works, Paul Lee joins empty frames with tambourines, stretched canvases and panes of glass into roughly square assemblages that constitute a ground to which he adds painted squares and rectangles. With a palette limited to black, white, pale blue, lavender and red, he creates the illusion that these painted geometric shapes are hovering above the picture plane. The majority of the pieces are constructed from two tambourines and two rectangular forms. The interplay of round and straight edges is dynamic, and the tambourines provide a tactile element with their stretched “skins,” some of which are painted while others are left exposed.

These new paintings represent a departure from the artist’s previous style of sculptural combines. In a July 4, 2016, interview with “artcritical,” an online magazine, the artist discussed this series. “I call these ‘touch paintings,’ because tambourines are activated by touch. The first tambourines I made had rectangles on them, and I thought of them as being like touch screens. The touch screen is part of our daily life; you can touch an image and it can lead you to another. The image becomes a path. It’s a visual space that becomes active in a new way. I think it is a new space for painting to happen.”

In addition to screen technology, Lee also cites Ellsworth Kelly’s shaped and curved canvases as an influence on this series. One is also reminded of Joseph Albers’ chromatic explorations using nested squares. And like Albers’ meticulous approach to color, Lee’s pieces are expertly crafted. The result is an exhibition of compelling work that is both serene and intriguing.