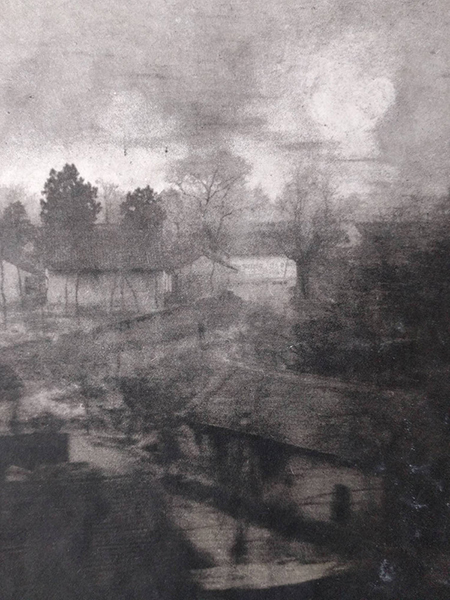 Peter Bogardus, photogravure print with pigment, from the series “Going to Gansu,” 2018

A century ago modernist art was regarded as a possible means of redeeming European culture, corrupted by kings, priests, and generals. The artist was seen as akin to an Old Testament prophet, and art-making as a kind of spiritual quest. Much of that utopian idealism came crashing down following the Great War and the purges of 1930s, but some of us in an art world corrupted by market values hunger for a return to spirituality and transcendence in art — sans art-profiteer executions. The work of Peter Bogardus would seem to be motivated by just such an interest in the spiritual and historical.

Over the last two decades he has created seven fine-art books, from “The Great Mystery” (1996) to “Places of Reverence” (2017). Each documents his travels to religious sites. Documenting is not really the right term: Bogardus’s monochromatic photos, generally shot on 4x5 film and printed with the labor-intensive medium of photogravure, are the by-products of an artistic quest.

In ‘’Going to Gansu,” curated by Kate Contakos, Bogardus presents monochromatic photogravures from square-format Rolleiflex photos he took during a two-day train ride east-west to Gansu, at the western edge of the Gobi Desert in northern China, in 1992. Presumably his destination for that trip was the Mogao Buddhist caves at Dunhuang, created between the 4th and 14th centuries. But this body of work details the journey itself, with thirteen untitled misty landscapes that invoke mystery of an ecumenical sort.  The photogravures, which are photo-based aquatint etchings, hand-printed, with their soft focus and technical imperfections of scratches and areas of unprinted paper, resemble old daguerreotypes, while recalling in spirit the poetic landscapes of Asian painting. Printed on Kodohadamashi (“cloud surface”) hemp/mulberry paper, generally employed for painting, with traditional oyster-shell priming and mineral pigments (including woodblock-printed gray and beige background tones), these unpeopled works, glimpses from a speeding window twenty-six years ago, look back in time and history — and, to the meditatively inclined viewer, within.