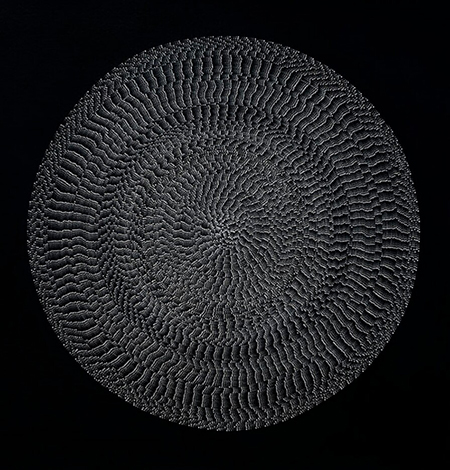 Recent exhibitions by Los Angeles artists Robin Mitchell and Robert Walker reveal that obsessive mark making, traceable to early 1950s California traditions such as the Dynaton movement, remains a viable path for abstract painters yet today. These venues suggest a revival of marks as a means for meditative spiritual awareness or as focused expressions of the pure pleasure of process. The idea here is that the perceptual effects of compositions built up from multitudes of individual marks can often transfer heightened states of consciousness to viewers.

A short-lived movement that blossomed in San Francisco in 1951, Dynaton was a collaborative undertaking by Wolfgang Paalen (1907-1959), Gordon Onslow Ford (1912-2003) and Lee Mullican (1919-1998), all of whom at the time were avid, dedicated mark makers. Paalen, who is best known for his fumage technique of painting with smoke from a candle, was making paintings by brushing on and layering broad dashes and blotches of oil paint that appear to float in space and extend beyond compositional borders. Onslow Ford, who came from a background steeped in Surrealist automatism, was exploring a personal calligraphy consisting of just three types of marks: the line, the circle, and the dot. He believed that these are the fastest forms that an artist can produce spontaneously and, hence, the most purely automatic. Mullican, who had been a cartographer as well as a student of tantric Indian art, used the edge of a palette knife to build compositions from repetitious linear striations. He viewed painting as a form of meditation. The Dynaton artists, influenced by their unique blend of interests in Surrealism, physics, Zen Buddhism, and Native American and Pre-Columbian art, established a West Coast modernist approach to transcendent painting. Although not connected with the Dynaton group, Seattle-based Mark Tobey (1890-1976) was achieving similar ends during the same period.

In his recent fifteen-year retrospective at Jason Vass Gallery, Walker brings a contemporary sensibility to the Dynaton tradition, which is particularly evident in the optical dazzle of his abstract paintings composed from thousands of tiny, uniformly applied, evenly distributed dots and dashes. Configured so as to form circular mandalas, these compositions optically convert "many" into "one." In "116,168" (2012), 116,168 specks of white ink were applied by hand to a black fiberglass surface, with no mark physically touching another. Propelled by the contrast between white and black, the image produces the optical effect of quietly spinning like a slow-turning wheel, thus becoming a device for triggering meditative consciousness while also conjuring up metaphoric associations with such things as an ornamental carpet or a pulsating gong. In other works, Walker painted an empty chair, a traditional symbol for the presence of the Buddha, into the center of fields of abstract markings. As witness to these paintings, a viewer's eyes may meander back and forth between the still representational image and the active abstract field in which it is immersed, which will evoke alternate sensations of quietude and joy.

Mitchell's exhibition at Craig Krull Gallery was comprised of paintings that are similarly activated by the interaction of individual marks, gestures, and brushstrokes. Applied with careful precision and a steady hand, Mitchell's marks are organized into rhythmic concentric circular configurations. Related to the concept of a universal breath or life source, Mitchell's markings have been described by the artist as "breathing in and out … and the throb of a beating heart." Although Mitchell works on a variety of scales, and on paper as well as canvas, her larger works on canvas are the most impactful. Her oil painting "Thermometer" (2016), in fact, is aptly titled because the revolving movements of concentric rings and dashes emit a heated jolt of explosive color that recalls the similarly effervescent palettes of some of the early 20th century pioneers of abstract painting, such as Frantiçek Kupka and Sonia and Robert Delaunay. With rings of color superimposed over a ribbon-like floral pattern that looks as if it is composed of vibrant white light, Mitchell's paintings express a celebratory affirmation of life.