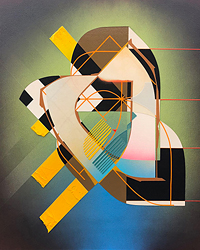 Alex Couwenberg has chosen the title “Chevrons,” referring to the V- or caret-shaped motif in heraldry that most of us associate with the Chevron gasoline logo, with its nestling red and blue V shapes; a sergeant’s stripes, with three gold carets; or Kenneth Noland’s “Chevron” series of hard-edged abstract paintings made in the early 1960s.

But while Couwenberg is influenced by crisply delineated shapes faultlessly rendered, these works adopt the spatial ambiguity of cubism, with abstract forms suggesting overlapping architectural plans or machine parts in a temporary balance. Couwenberg: “The additive and reductive processes of my paintings reveal compositions of densely layered forms and patterns that weave in and out of each other, suggesting space, time, and the moment.” While Noland’s “Chevron” paintings propounded an aesthetic of radical purity, Couwenberg’s works, despite their Southern California design clarity (related to automobile and surfing culture), reflect the current cultural moment of diversity and uncertainty.

His use of alternating black and white stripes suggest modernist architecture, herringbone fabric and super graphics. We think, too, of shadow patterns used to cinematic effect in film noir, which was so often set in the City of the Angels. Mysteriously beautiful forms, with their multiple associations, seem to float in shallow space, set off by airbrushed shadows and halations. Ruler-straight lines and compass-perfect curves —sometimes flat, but sometimes rendered in low-relief gel-heavy acrylic that looks like collaged cardboard, wood or plexiglas —  are contrasted with irregularities. Such broken forms and brief passages of impasto emerge from the flat, otherwise pure picture plane. Couwenberg’s titles, such as “Bombardier,” “Mai Tai” and “Pleasure Seeker,” convey an ironic 1960s vibe. His use of color, while lush, is modulated and shadowed. These icons are fascinating both for their complexity and contradiction.