Having a Good Time?
Editors’ Roundtable
Column by James Yood 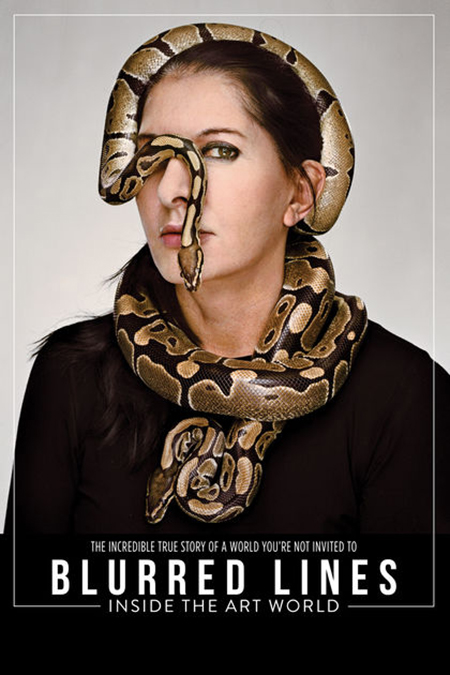 Poster for “Blurred Lines: Inside the Art World,” 2017, documentary film featuring Marina Abramovic (pictured) and many others

I've just watched "Blurred Lines" twice. No, not the Robin Thicke music video, I mean "Blurred Lines: Inside the Art World," the 2017 documentary now being featured on Netflix and YouTube. I'm endlessly fascinated by documentary programming aimed at a mass public about the contemporary art world. All in all, they seem to fall into three categories — there's the kind we approve of in the art world, the Art21 PBS sort of series, usually monographic (recently about cities and their artists, including Chicago, Los Angeles, Mexico City, Vancouver), very respectful of the artist, a good mix of analysis and the artist's voice, pretty serious and sober stuff. Then there's the modern-art-is-a-joke branch of documentary, speaking to already convinced historicist flamethrowers that modern and contemporary art is some conspiracy built on a purposeful abandonment of shared and definable cultural values, led by effete pseudo-intellectuals from New York and Paris. These are usually briefer films, but have a curious appeal, the wistfulness with which their talking heads speak of earlier art, the nostalgia for what they see (and I believe, misrepresent) as a simpler and more honest time with universally accepted criteria for judging art.

And then there is a third category, which is what "Blurred Lines" offers, a way of talking voluminously about the contemporary art scene while only obliquely ever talking about the art itself. It's a good strategy; while most of the public (and that's who these documentaries are aimed at) doesn't have a clue about what, say, Postminimalism is, they certainly understand what $450 million (the price paid last year for a painting attributed to Leonardo da Vinci) indicates, and never tire of hearing about the seemingly arbitrary and somewhat decadent doings of the rich and richer. So, while artists such as Damien Hirst and Jeff Koons are trotted out a few dozen times in this documentary, with quick views of their work and their own clever on-camera quips about art and the market, there's pretty much nary an effort to even at the most basic level to discuss what they are attempting as artists. Koons and Hirst are presented as the poster boys of an art market gone wild, their work the gold standard for a conspicuous consumerism of the ultra-rich restlessly seeking another investment opportunity.

But I should be fairer here, there's much about "Blurred Lines" to be liked. The filmmakers did their research well, and the snippets from interviews are almost without exception excellent ones, and hearing from artists such as Rashid Johnson, Sterling Ruby, Taryn Simon, Adam Pendleton, Julian Schnabel and others is illluminating. The film's director, Barry Avrich, does have these artists speak about their work before turning to talking about their career, how the art market does — or in some cases doesn't — occupy a great deal of their thinking. But most of the film focuses relentlessly on the market, and the seemingly endless parade of dealers, critics, collectors, museum directors, auction house staff, etc., that makes up the bartered soul of the film. And with just cause. The history of art has for the last few thousand years always been linked to the history of commerce, to some kind of system of recompense that allows its pursuits to be monetized in a stable manner that is completely unlike the inherent chaos of the creative product at its center.

There's no denying that the last 30 years or so has witnessed an explosion of market growth in the visual arts, particularly in contemporary art and in the new role of auction houses and art fairs in marketing it. Parallel in structure to Sarah Thornton's 2008 book "Seven Days in the Art World" (Thornton also appears in the film), "Blurred Lines" concentrates on what's changed in recent decades, and again provides excellent commentary from major players on the business side of the art world. (My particular favorite is David Kordansky, very smart and thoughtful, I've made a note to visit his gallery next time I'm in L.A. just to watch him from afar.) The film is broken up into about a dozen fairly elastic sections — "The Collector," "The Artist," "Overexposed," "The Art Fair," "A Victimless Crime," etc. — and is perhaps a bit too LA/NY/London-centric. But it is quickly paced and, until the bubble bursts, if it ever does, everyone seems to be having a pretty good time.

There's the now almost obligatory little cruise through Larry Gagosian's career (although he doesn't speak on camera) and just enough contrarians such as Christian Viveros-Faune to keep this from degenerating into a love fest. There's not much on art criticism or the role of the museum curator in taste making (though there is plenty about professional art advisors), this is more a film about cash and carry than look and learn, and you know what you're in for when quotes from Jerry Saltz are presented as if they were from the Old Testament. I'm going to give "Blurred Lines" 3 1/4 stars. It's a good freeze-frame of our moment, not so much about watching sausage being made, that's too blue-collar, this is a bit closer to how foie gras is generated within a goose with seemingly enough fat for everyone, and a what-me-worry? suspicion that what and how we're consuming all of this may not be actually good for us in the long term.

Oh, and Robin Thicke's "Blurred Lines?" He and Pharrell Williams were sued for copyright infringement and ordered to pay $7.3 million to the estate of Marvin Gaye. Roll over Beethoven, and tell Mark Rothko the news!