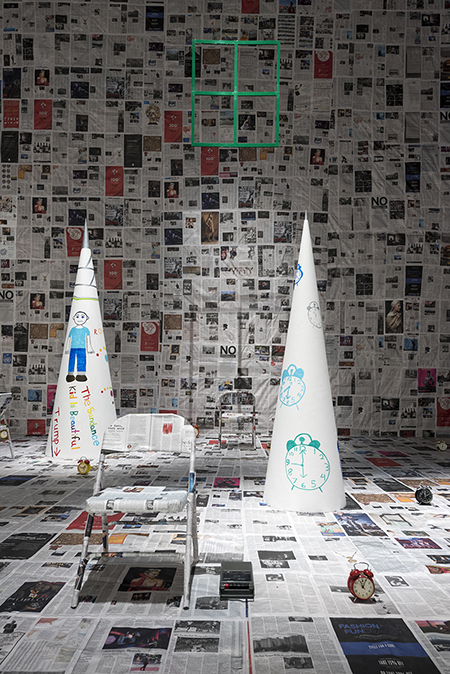 Christopher Knowles’ work is part naive, part outsider art. This major retrospective includes paintings, sculptures, recorded readings, music, poems and even drawings created with a typewriter. The most impressive work, however, is the recreated set of one of the artist’s performance pieces, “The Sundance Kid is Beautiful.” Newspapers blanket the walls, floor and ceiling of a large section of the gallery. A few folding chairs covered in newsprint are randomly placed in the space, along with several large painted cones, vintage wind-up alarm clocks and cassette players. This was the setting for an hour-long solo performance during which Knowles moved about the space reciting short texts, some of which were from his libretto for Robert Wilson and Phillip Glass’s “Einstein on the Beach.” Now 58, Knowles owes his career as an artist to Wilson, an esteemed theater director and sculptor who discovered the young man when he was 15 years old. Knowles had been diagnosed as autistic and did not learn to speak until age 12. A friend of his family gave Wilson a cassette tape of an poem that the young man had written and recorded. Wilson was intrigued and took Knowles under his wing, introducing him to the public in 1973 as a performer in “The Life and Times of Joseph Stalin” at the Brooklyn Academy of Music. The two worked together on theatrical pieces for the next 14 years.

Knowles makes sense of his world through repetitive patterns and the measuring of time. Clocks and calendars are omnipresent. He uses mainly common materials such as paper, markers, paint and ink. The typewriter drawings include lists of popular songs on a certain day in 1967, reimagined song lyrics, and images of alarm clocks, cars, figures, buildings and abstract patterns. Using just the letter “C” and typing in both red and black ink, he is able to visualize the end results before he starts typing. Like the work of many naïve artists, Knowles’ paintings and drawings have a childlike simplicity and flatness, as he has no interest in or knowledge of perspective. All share an interest in language, both spoken and written. Music and repetition played a major role in Knowles learning how to speak, and music, the passage of time, and the routines of daily life continue to inform his work. This is an idiosyncratic exhibition that provides a fascinating glimpse into the intricate workings of the artist’s mind.