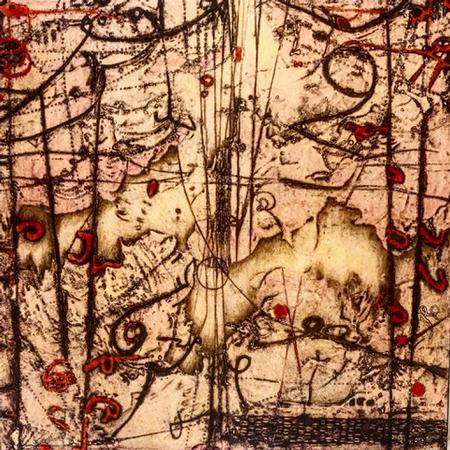 Runes, astrological symbols, and celestial imagery have figured prominently in Elise Wagner’s visual syntax. In her new body of work, “Climate Charts,” she deploys a sophisticated encaustic technique to address global climate change, specifically the melting of glaciers. Executed in 2016 and 2017, the mixed-media paintings are predominantly the hue of blue ice or rock-flour lakes fed by glaciers; many, such as “Glacier Stream” and “Residuals,” are segmented into multiple panels, evoking the fracturing of polar ice sheets.

Wagner adapts printmaking processes into her nubbily textural compositions in series such as “Arctic Contour,” and she incises the surface of “Glacier Chart 13” with concentric forms to suggest the inexorable shrinkage of ice floes. It is to the artist’s credit that an exhibition themed around such ominous climatological phenomena manages to avoid didacticism or an oppressively apocalyptic tone Rather, Wagner uses her quiver of tools to illuminate this subject matter in ways that convey formal aesthetic values — beauty among them — in addition to sobering geopolitical commentary.