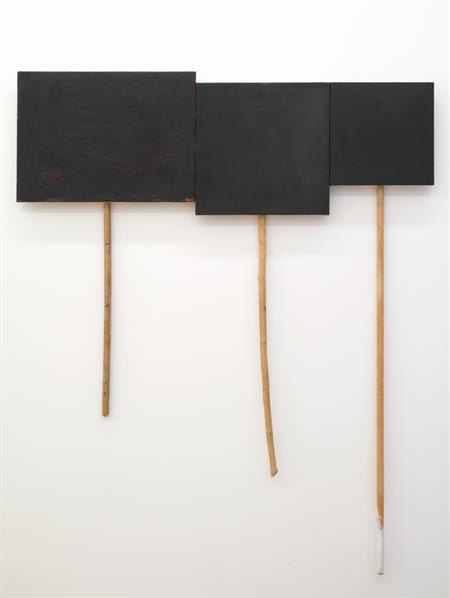 Two concurrent exhibitions at Seattle Art Museum, “Denzil Hurley: Disclosures” and “Sam Gilliam” offer a wonderful opportunity to compare examples of abstraction in the hands of African-American painters. Hurley is about to retire from the University of Washington School of Art after a career at other leading institutions such as Yale, Scripps and Hampshire colleges. Conducting a vigorous studio practice and out-of-town gallery and museum shows in New York, Kansas City and elsewhere, Hurley is noted for severely reductive monochromatic canvases seen regularly, until its recent closure, at Francine Seders Gallery, long the go-to gallery for UW faculty. Since then, Hurley has shown the work that’s on view at SAM, all-black canvases with protest-sign-like sticks beneath them, in New York last year. Critic Blake Gopnik referred to them in Art Net as “protest-ready” and “prototype placards.” He raised the thorny issue of how abstract art, seemingly non-referential, can carry political or social content. This could not be timelier considering the particular pressures on artists of color at this time to incorporate more resistant content into their art.

Hurley’s “Glyphs” hang alone and in groups, like clusters of people at a protest demonstration. Blank due to their resolutely black color and, hence, reminiscent only of the scene or event of protests, they could also be read as protests against protest art. You want political abstraction? Take these! Circumambulating the gallery, one is taken more with the idea of protest than anything residual. The color black, however, has its own cultural and personal resonances in Hurley’s hands. Many of his finest works have been stacked-up piles of all-black canvases of varying sizes. This is all to the good, but I miss the burning-sun yellows and blistering sunset-oranges of Hurley’s earlier work, highly abstracted allusions to his Caribbean childhood in Barbados.

“ZB3, Stacked Glyph” (2014-16) is a good example of the older polyptychs, but much more somber in its deep layers of black and other under-colors like navy blue. “Redact #2” (2014) and “3 Square Sign Glyph #1” (2015) are more intimate, works on paper that hold their own but could act as studies and explorations of the original placard-stick idea. There’s a whole legacy of modern paintings that are all-black: Kasimir Malevich, Ad Reinhardt, Frank Stella. Hurley has added his chapter, bringing such an approach of restraint and withholding into the current century.

At 84, Sam Gilliam, based in Washington, DC, is a senior American abstract painter, long recognized for having extended the Washington Color School beyond the stripes and targets of its originators Gene Davis, Kenneth Noland and Morris Louis. Complicating their “color field” with more colors while rejecting the chromatic separateness of Davis’ structural approach, he also resisted fellow African-American DC painter Alma Thomas’ horizontal dashes over solid backgrounds. Gilliam blurs and blends many different colors at once while going so far as to dismantle the canvas stretcher itself, a radical move half-a-century ago that served as his signature contribution. Hanging there like giant curtains, Gilliam’s huge untitled canvases dominate their settings and, with four on view here from one year, 1973, and one work from 1977, we get an exciting chance to see how paintings can evolve from one another in a finite period of time. Sharing an approach to all-over compositions with Abstract Expressionism’s ace Jackson Pollock, Gilliam goes farther with submerged shapes rising and receding as the eye inspects each large painting, up to eight feet wide, challenging the unity of Pollock’s drips and varying their width, texture and density.

Once Gilliam detached the canvas from the frame, it was not be long before he replaced the canvas with stiff polypropylene plastic. Machine-stitched factory-based patterns can be seen underneath globs of acrylic paint, mocking a Cubist grid and providing repeated-element support for the explosive painterly attacks. Favorably compared to Willem de Kooning and Hans Hofmann, Gilliam has lived long enough to become appreciated and admired outside of their generational shadow. Comparisons to fabric design and draperies are no longer considered slurs. They are renewed appreciations of a decorative arts approach to painting that takes into consideration, for example, West African weaving, often exclusively undertaken by male weavers and known for interleaving golden threads. Gilliam is a magician of color and cloth, parodying batik, ikat and other ethnic dyeing and sewing techniques that draw upon global craft traditions to extend the arena of gestural abstract painting well into the current century. Gilliam uses it as a vehicle for dynamic, optimistic personal expression.