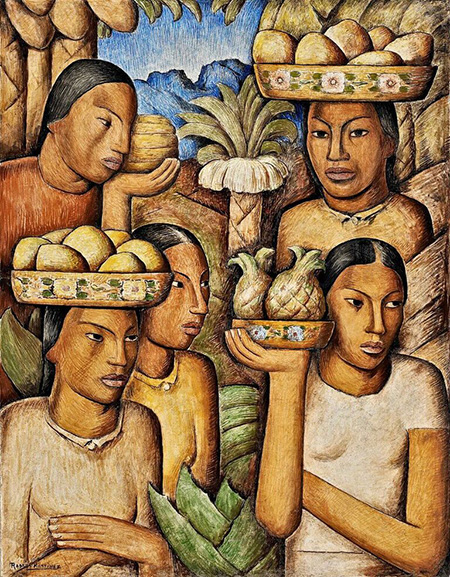 There are artists who attain an element of fame in their lifetimes, only to fade into oblivion in coming generations. Sometimes they are rediscovered years after their deaths. Alfredo Ramos Martinez, for example, has until recently  gone  largely  unnoticed. In spite of being considered among the fathers of Mexican Modernism, celebrated and commissioned to create numerous murals in his lifetime, he was  separated from the prominence achieved by contemporaries Diego Rivera, Jose Clemente Orozco and David Alfaro Siqueiros. Though they concentrated on visions of war and revolution, Ramos Martinez chose to paint more idealized versions of his homeland. Perhaps it was stylistic similarities to then more traditional imagery that made him less distinguishable  from other Hispanic artists; in truth, the range of Hispanic art in general beyond the three mainstays remained largely  uncelebrated for many years.

This Pacific Standard Time, LA/LA exhibit seeks to amend that by bringing to the forefront the connection between American and Latin American artists. It places Ramos Martinez as among the leading native Mexican artists of his generation. Born in Mexico in 1871, he  studied at the Academia Narcional  de Bells Artes, a place he believed stifled his individuality. He relocated to California in 1930, where he was introduced to American individualism. During that time he was highly productive, creating a prolific amount of paintings and murals. He consequently captured the attention of Phoebe Hearst, who financed his studies in Paris. During his time abroad he was exposed  to the theoretical approaches of Impressionism and Post-Impressionism, elements of which he incorporated into his work.

Though he continued to explore the formal parameters of volume and space, line and color, he remained ever connected to his more indigenous visual roots. Always in touch with his heritage, Ramos Martinez learned to meld European and Mexican styles. Ultimately  his overwhelming sense of belonging to Mexico won out, and he separated from mainstream modernism by turning to subject matter that was distinctively Hispanic in character. Bold compositions, geometric patterns and brilliant colors came to predominate.

Ramos Martinez’s paintings offer intimate insights into the pluralistic nature of Mexican culture, particularly the ethnic complexities of indigenous people. He captured the deeply ingrained regional and national influences through popular images of mothers and families, and in tender relationships between husbands and wives. Those subjects were appealing in their universality, but this exhibit showcases examples of subjects that are distinctively Hispanic. The nature of Mexican workers, for example, is exemplified in “Vededora de Frutas," where men and women vendors carry their wares, the women with baskets on their heads. Close-ups of their faces reflect their anxieties. Also featured are a few samples of  dramatic Mexican landscapes where mountains are rendered in vivid shades of reds and golds.

Another distinctively Mexican subject is the religious fervor of the meso American cultures, their distinctive spiritual elements springing from a combination of Catholicism and pre-Columbian religions. Religious conformity is  evident in "Procession of Nuns.” Rendered in shades of beige, their geometrically elongated figures march in rigid formation. The results of Mexican wars, another prominent subject for Martinez, is evoked poignantly in "The Bondage of War.” A close-up of a man held in bondage  gives an intimate view of a sorrowful victim. It shows Ramos Martinez to be much more than a promoter of national identity.