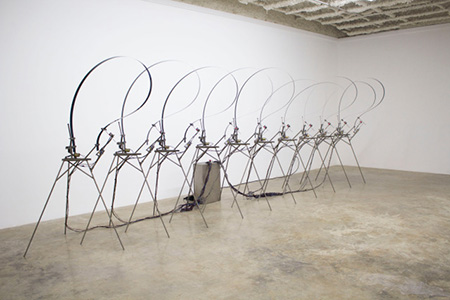 Jack Pavlik’s ten kinetic sculptures sit silently for a moment before they begin moving rhythmically, producing a metallic music best described as a series of chimes. The title of the show, "10 Waves," describes how they move, as one begins and the others follow in a wavelike motion. Lined up in a row against one wall of the gallery, they are somewhat anthropomorphic. The flexible bands of steel that rise and dip to create the “music” resembling large heads, the armature in the middle suggesting a body with arms, and the tripods serving as legs. The movement and music are scored on a computer, and each loop lasts about 15 minutes. Pavlik brings his welded steel pieces to life with carefully choreographed movements and electronically produced sounds resulting from metal striking metal. With this installation, Pavlik investigates the symbiotic relationship between man and machine that has become such an integral part of modern life, raising practical and ethical questions regarding the evolving role of such devices as computers, robots, and smart phones. On the 10th anniversary of the introduction of the iPhone, it is instructive to consider how the relationship between man and machine is becoming increasingly intertwined. These older sculptures (from 2005) and Pavlik’s more recent performance pieces explore man’s domination over machines and, conversely, machines’ domination over man.

In the second gallery, Louis Watts presents 20 charcoal drawings arranged in two rows on one wall. Titled "On Today," they are only a portion of the original suite of 64 drawings, all depicting a rectangular gray shape floating on a black ground. Using a layered charcoal-powder technique, Watts worked on the drawings for several months in 2016, creating one or more a day. The drawings vary only slightly, and during their execution, the artist was considering, in his words, “questions about factory art production methodology, the idea of transcendence through quotidian labor, reflections of power dynamics, ideas of structural, or ‘object,’ drawings, attention to secular mysticism and drone philosophy, as well as speaking to the vernacular of repetitive band posters in urban environments.”

"On Today" attracted the attention of Austin-based theologian Dr. Gary Slater, who began considering the philosophical implications of the project. He wrote an essay titled “Meditation Without Religion,” in which he views the project as sharing certain qualities with religion, such as “the cultivation of joy within monotony” and “the relinquishing of control over elements of the process of creation.” Dr. Slater sees the suite as objects of contemplation by the viewer and a commitment by the artist to replicate a certain image through repetition, not unlike copying the Bible by hand prior to the 15th century invention of the printing press. The first presentation of "On Today" was a full-room installation consisting of an infinitely looped animation of the 64 drawings. Watts likes being able to alter the number of drawings shown at any one time. In this iteration, he chose to show only 20 as a numerical counterpart to Pavlik’s "10 Waves.” "On Today" is an open-ended program and will appear again in a different variation, but likely never again as part of a provocative dialogue with an installation of clever kinetic sculptures.