“Tomorrow is Another Day”
Editors’ Roundtable
Column by James Yood 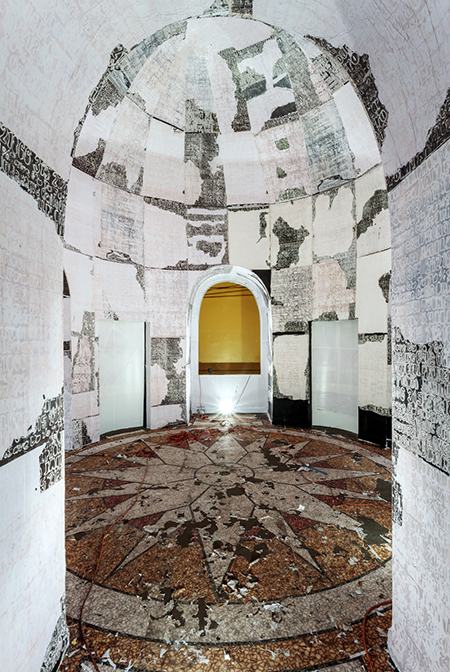 The greatest surprise about Mark Bradford’s pavilion at the 2017 Venice Biennale is that the current U.S. State Department hasn’t shut it down. Bradford’s installation, titled “Tomorrow is Another Day,” seems so clearly a gut-wrenching response to the tenor of America following the Trump election and his early presidency that it reads as an impassioned cry that approaches — but doesn’t quite reach — aesthetic sedition (“conduct or speech inciting people to rebel against the authority of a state or monarch”). The work voices a lament that whatever the U.S. represents today, it feels so broken and disgraced as to make dismay and mourning seem the larger and appropriate actions in response.

Some context, first. On April 18, 2016, Bradford was named by the U.S. Department of State’s Bureau of Educational and Cultural Affairs to represent his country in Venice in 2017. Bradford, already known as an artist with a strong commitment to working for political and social change (as he once put it, “why not put contemporary art and social justice and community activism together, and see what happens?”) was undoubtedly intending to use the platform of the Venice Biennale to use his art to speak to the issues — among them, immigration, family services (particularly foster care and adoption), LGBTQ rights, etc. — that concerned him.

But between his being named to this task (he was selected during the Obama administration) and the opening of the Biennale came the election of Donald Trump. Suddenly the issues must have seemed heightened for Bradford. Suddenly the feeling that whatever progress might be heading in the direction of the issues that motivated him was being undercut and overturned by the new administration, leading Bradford to take this most public platform to express aspects of his pessimism and outrage about the state of America today.

Bradford’s American Pavilion is practically a disembowelment of the smallish Beaux-Arts building that has housed the American contribution to the Biennale since 1930. It begins before you even enter the space, with Bradford’s "Barren." Piles of gravel are strewn about the forecourt, as if this is some construction site. Bits of trash are also scattered about. The stately and august portico entryway with its fluted Doric columns looks like something abandoned and forlorn. You find your way to a side entrance and enter the first room; at least, you sort of enter it, forced to splay yourself against the wall as almost the entire space is filled with what seems a huge, cancerous multi-colored bladder that seems to grow from the ceiling. You’re uncomfortable, space is compressed, this art-tumor titled "Spoiled Foot” can’t be fully viewed, only its contour can be circumscribed.

Then you enter the suite of three rooms that make up the heart of the pavilion. There are paintings in the first room, three monochromatic gray ones that suggest DNA profiles. But dominating this room is the first of several sculptures, this one titled “Medusa," constructed out of twisted masses of bent slats of brown paper besmirched with black slathered paint, reading more as writhing intestines than snakes.

The central room of the neo-classical mini-rotunda (itself a reminder that Palladio’s Renaissance architecture was the primary influence on Thomas Jefferson’s Monticello, the building the American pavilion most closely resembles). It’s in shambles; Bradford has scraped paint from the walls, covered the ceiling of the rotunda with more ubiquitous swathes of brown paper that resembles an Anselm Kiefer painting, full of churning passages of black paint. Thresholds are battered, doors and archways seem bereft and abandoned, this is a pavilion in physical — read metaphysical — ruin. Whatever values it stood for, whatever message of America it purported to convey to an international audience, is unmasked and stripped to its hypocritical core, it is an empty shell of itself, a ruin.

I would have preferred it if Bradford’s pavilion had stopped right there, and would have seen his endeavor as a scathingly earnest flagellation of an America that dreamed it was exceptional, but in reality is encumbered with too many horrors of its own making to wish or sloganize them away. The two last rooms, the first with three large and fine Bradford paintings that, while sober and more chastened than much of his work, does little to further the journey of the four rooms and forecourt that preceded them. Indeed, they offer the hope that the worst of what is dragging us down can’t finally and completely suppress our traditions of fairness and justice. The final room shows “Niagara," a video he made in 2005 of a young black man in Laker-yellow basketball shorts seen from the back energetically sauntering down a Los Angeles sidewalk, his body lithe and self-possessed, ready for anything. That’s a bit of the American myth too, as is the geological good fortune that blessed us with Niagara Falls (though the best of that is in Canada), a natural metaphor of the power and uniqueness of the U.S.

“Tomorrow is another day” is the final line of both the novel and the film "Gone With the Wind," and is usually interpreted as reflecting core American confidence in the future and the belief that whatever bedevils us is temporary and fundamentally fixable. It’s a soothing concept, and Bradford himself may believe it; he certainly has dedicated a great deal of his life and energy toward working for the causes he holds dear. While he has undoubtedly been shaken by the events and actions, not just of this past year, but of an America that for now seems strange and foreign to many of us, he chose to conclude this most public venue with a film of a young African-American man walking down a city street as though he were king of the world. Please don’t tell the State Department about him.