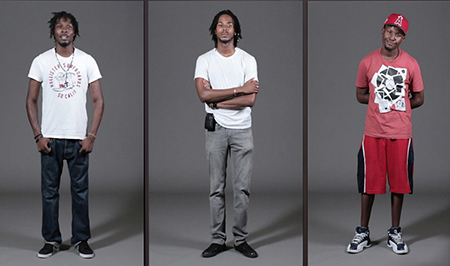 The social justice message of “Bold Disobedience” is markedly assertive — a characteristic that’s tied to the second premise of the show: that the curators and half of the included artists are Chicago high-schoolers who are under voting age. It is through the student curators’ selections of works by their peers as well as seasoned professionals that the exhibition is defined by directness, urgency, and the authenticity of first-hand experience that is promised by its title.

Among the works by 15 artists and collaboratives there are pieces that stand out in their ability to provoke an intimate understanding of issues that so often are presented as superficial rhetoric. In Dread Scott’s two-channel video installation, “Stop,” six young black men (three are American, three are British) each stand alone in a blank backdrop. At varying intervals, each man states the number of times he’s been stopped by police: “I’ve been stopped 150 times or more.” Without any other narrative, circumstance or context, Scott allows the sheer number of incidents to exert their impact. Each man gazes directly at the viewer, as if waiting for your reaction.

Chicago High School for the Arts grad Natalie Aparicio’s “Altar” is an ofrenda-like installation of objects and photographs that address issues that permeate life in Chicago's Latino neighborhood of Pilsen, including gentrification. Pictured in one image, a white boutique owner stands in her shop’s doorway, while a Latina mother and child stand in the adjacent one. The hip wares in the shop owner’s window tells us that she’s one of the creative types attracted to Pilsen’s affordable rent, the combination contributing unknowingly to the dynamic that gradually prices out people of color. Aparicio, like other artists in this exhibition, succeeds at mirroring such realities to the viewer with extraordinary clarity.