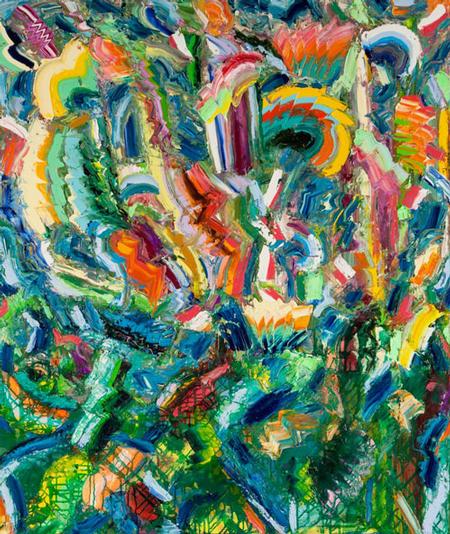 Monroe Hodder revels in paint-qua-paint: goopy, gloopy impasto slathered with unabashed abandon, further heightened with brash Crayola colors harkening to the circus, the carnival, the funhouse Ronald McDonald fantasia of childhood idyll. Her new body of work, “Future Sky” (all works from 2016), is the province of neither restraint nor subtlety and will delight viewers predisposed to painting as go-for-broke performance art.

Hodder adopts several compositional strategies as a conduit for textural opulence. In “Through the Flowering Night” she sets up an opposition of diagonals in visual staccato, while in “Ruby Horse Thief” a framing device of crisscrossing brushstrokes accentuates a picture plane of slashing horizontal stripes. Curvilinearity enters in the deliciously titled “Lust and Rue,” as it does in “Surprise Painting.” The latter work has more breathing room than its compatriots, its riot of surface and chroma tempered by just enough negative space to drive home their voluptuary appeal.