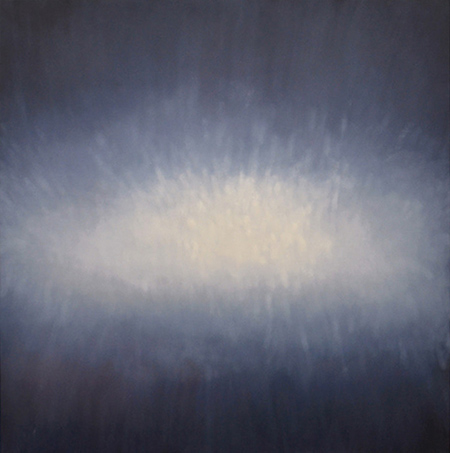 Alex Weinstein, "The Next Thing You Know" from the "Burst" series of paintings, 2016

Stand under the sun and close your eyes to see the light dancing on your closed lids. Dive under the waves, hold your breath, look up and see the sun droplets darting above your head. Go to the desert, beyond the reach of city lights, tilt your head towards the stars and watch them puncture the covering of night. Imagine almost, but not quite dying. See the light at the end of the tunnel. Do these things and you will understand the art of Alex Weinstein.

It’s an art of ambiguity, of the in-between, of the liminal where the threshold separating representation from abstraction can be explored. Weinstein speaks the language of abstraction to provide a space for the viewer to enter and experience both a revelation and a sense of dislocation provoked by non-specific representation. His color field paintings are large but not large enough to encompass the spectator, who must step forward to examine the surface and experience dislocation: something is pushing though the dense color — a new color or another experience. The artist allows for discovery, hoping that the collision between real and abstract on canvas will evoke the transient nature of life, where appearance is followed by disappearance.

Weinstein’s earlier canvases were exercises in covering his tracks: the artist disappeared through the process of laborious hand painting. He feathered countless strokes that aped the airbrush in the hope that the materiality of the paint itself would dissolve the impulse to read painting in terms of facture. But it would be a mistake to think the artist was withholding pleasure. In fact, Weinstein is not the cool minimalist nor is he a conceptual artist. He paints rather than make movies or work with computers because he is committed to the idea that an artist makes things by hand, as an act of manual labor. Just as the cave dwellers pressed their hands against the walls to leave signifiers of themselves, Weinstein creates an object which acquires the aura of its maker, giving presence through process.

Despite its title, the “Burst" series has no connection to Adolph Gottlieb or to atomic warfare. Instead, one of the artist's touchstones is the late work of Monet, an artist by then going blind, desperately glimpsing light through his clouded eyes and creating a glow with his almost neon colors. Monet’s late work is a rage against the night, like a lens flare in the coming darkness. Likewise, Weinstein’s “Burst" paintings allow a return to pigmentation, a subtle dappling of the surface that suggests fireworks exploding in a distant sky, seen before being heard.

These paintings are, says Weinstein, “… like birth and dying, falling in love, impermanence, change, the roiling instability of just being alive.” Like the “Burst" series, the "Double Negative" landscapes, odd diptychs stacked vertically, have nothing to do with the obvious antecedents, in this case Michael Heizer’s 1970 earthwork of the same title. Weinstein looks up to the limpid sky. The uniqueness of the atmosphere over Los Angeles is best expressed with its gaudy Hollywood sunsets. Weinstein thinks in terms of the noxious mixture of smog and airplane fuel that drift over Manhattan Beach where he lives. The aerial soup makes for a vivid Götterdämmerung every evening. If James McNeil Whistler were alive and living near LAX, his “Nocturnes" would be studies in scarlets and oranges rather than the river tonalities of blues and greens he found in London. But Whistler worked in transparent washes and Weinstein’s landscapes are thicker, evoking Brice Marden’s substantial wax pigmented color fields.

By putting a pair of canvases together, the artist is juxtaposing earth and land and focusing on the non-place where sea and sky touch and dissolve into each other. These landscapes of Los Angeles are not made of light and shadow but of urban grit and noxious surplus. Weinstein proposes that his "Double Negatives" are also metaphorical, “… spectacle fighting against the void, of ambition running rampant and desperate throughout the city.”