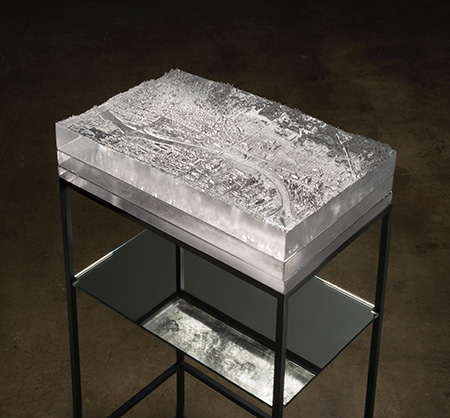 We tend to think of architecture in terms of form and space, but rarely time. The two-person exhibition “Suspended Time” aims to redress that tendency. Jenny Trinks photographs buildings as the sunlight changes throughout the course of a day. She turns these photos into enamel or glass-powder paintings, which she sandwiches between glass panels, then kiln-fires. Afterwards she slices the panels into rectangular wedges, turns them sideways, and assembles them into compositions that read as abstract, even as they retain the suggestion of architectonic structure and chronology. Mostly the color palette hovers in slate, periwinkle and gunmetal blue, but pieces such as “Mésange bleue (Blue Tit)” (2017) venture more sensually into earth tones of sunflower and mustard.

Two cast-glass sculptures by Norwood Viviano look at time’s relationship to the urban environment from a more macrocosmic lens. “Mining Industries: Downtown Seattle” (2014) counterposes a topographic depiction of Seattle circa 2013 with a black-and-white photographic transparency of the city circa 1950. Another piece compares the sprawling Microsoft campus in Redmond, Washington, with the site as it looked when it was undeveloped forestland. In both works, the transparencies are reflected in a mirror on the sculptures’ pedestals, allowing viewers to survey the past and present in the same glance.