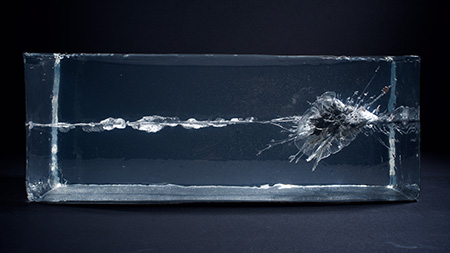 As a three-person collective based in Ho Chi Minh City, Vietnam and Los Angeles, it’s not surprising that The Propeller Group’s conceptual works draw from Southeast Asian culture and locales. The vital component is how the videos, sculptures and installations delve into multiple issues, including: the slick production of propaganda, the commodification of gun violence, and the globalization of culture. This ambitious show is the first survey featuring members Tuan Andrew Nguyen, Phunam and Matt Lucero, who banded together in 2006. Not just an exotic journey of sights and sounds, the show is a thought-provoking look at Eastern versus Western societies.

The must-see work is the 20-minute video “The Living Need Light, The Dead Need Music,” which mines the similarities between funeral traditions in Vietnam and New Orleans. It’s a mesmerizing cinematic flurry of saturated colors, eerie narration, stoic actors and bizarre juxtapositions. There’s all that, and snake charmers, fire breathers and a recurring Vietnamese brass band (which at several points marches through a swamp). The sometimes wry combinations offer a poetic message about honoring the deceased.

A few of the works turn to gun violence and war imagery, with most attention going to a collection of seven clear rectangular blocks on pedestals and a related video — all having to do with the symbolic rivalry between the Soviet-designed AK-47 assault rifle and the American-made M16. What would happen if the guns were aimed at each other and the discharged bullets fused in mid-air? The seven gel blocks are evidence of the experiment, encasing the bullets in motion, to surrealistic effect.