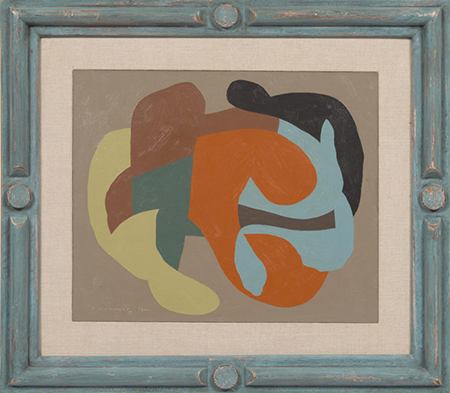 When it comes to the history of Modernism in art, Frederick Hammersley can certainly be regarded as one of the acclaimed contributors. The current show of his eclectic oeuvre covers almost every period of his 50-year career. It includes paintings, photographs, lithographs, psychological drawings, works on paper and computer generated art. Unlike early twentieth century artists who viewed geometric art as entrance to the spiritual realm, Hammersley’s keen sense of Modernism was more in line with the avant-garde instincts of artists such as Joseph Albers, Sol LeWitt and Richard Tuttle.

During a stint in the service during World War II he was stationed in Paris, where fortuitously he was introduced to the geometric proclivities of Picasso, Braque and Brancusi. It set the stage for a life-long interest, not only in how pictorial drama can stem from the arrangement of distinctive shapes and colors, but also in how abstraction could inspire imagination. He set out to achieve this by creating richly colored, inter-connecting forms, some subtle, others that vibrate with intensity.

Born in Salt Lake City, Utah, he came to Southern California in the 1940s to study art at Chouinard Art Institute (now CalArts). From 1948 to 1968, he taught in Southern California institutions. As one of the founding members of Southern California’s hard-edge school, one cannot speak of Hammersley’s art without mentioning the signature 1959 exhibit at LACMA, “Four Abstract Classicists,” which also included Karl Benjamin, John McLaughlin and Lorser Feitelson. The term “hard-edge painting” was used in relationship to the exhibit, a terminology geared toward distinguishing it from the emotionally charged gestural works of the Abstract Impressionists.

Attempting to offset the impersonality of hard-edge precision, he sought, instead, to create a process that was geared to project a sense of joy. It was an impulse that led to a life-long series of experimentations. Beginning in the 1950s, he began to divide his art into three categories: “Hunches,” “Geometrics,” and “Organics.” Though all feature radically complex arrangements of geometric shapes and colors, and each varies in intent.

In the “Hunch,” paintings intuition plays a prominent role. There are no plans or theories, simply making shapes and using feelings to dictate what eventually would evolve. In “Geometrics,” he took a more deliberate approach. The careful interlocking of shapes and colors were used to produce more formal compositions. “Organics,” composed of curving forms, take their inspiration from the natural world. In “Slipstream” (1964), for example, interlocking colors swirl against a background of red and lavender. In order to push relationships among those forms further, he devised a series of “cut-ups,” where organic paintings are cut into squares and turned into new geometric patterns. That it’s a method that goes back to the Dadaists indicates that he wasn’t averse to using old ideas.

A master of a variety of mediums, his expertise with dark and light shadowing is clear in photographs from Paris and New Mexico. In “Steps from Sacre Coeur, Paris 1944” for example, it is the subtle shading that sets the mood. The technique carries through in a series of exquisitely rendered lithographs. His prints on paper showcase his skill in the silkscreen techniques he learned at Tamarind Institute.

Hammersley never stopped experimenting with new methods and ideas, later becoming a master of computer imagery. Here again, his proficiency in black and white shading is prominent. For example, “3 Part Harmony” uses a grid format to create geometric gradations in shades of gray. By the 1980s, his paintings grew larger, the geometry sparer and more elegant. A prime example is “In two the fray, #5 (1978), in which large interlocking shapes are stripped down to simply black, white and brown.

Through his techniques varied, Hammersley never wanted his work to appear “too precious.” One amusing way he made his mischievous presence known was in the creation of handmade wooden frames. Artificially distressed, their homeiness tempers some of the exacting arrangements of the works they enclose.

Hammersley was not only a master of form, he proved that geometric abstraction need not be unremittingly serious. His objective throughout his long career was to prove that geometric renderings not only stimulate the imagination, they can also induce reflection and contemplation.