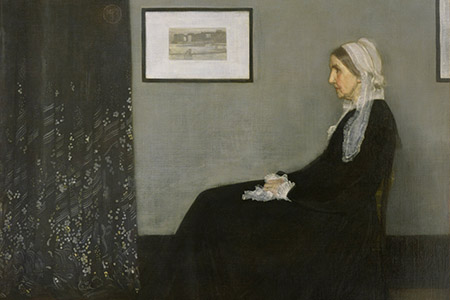 The smallish exhibition currently on view (through May 21) at the Art Institute of Chicago is “Whistler’s Mother: An American Icon Returns to Chicago.” It’s tucked away in a side gallery in the museum’s Rice Wing, where concurrently the large retrospective of Brazilian artist Helio Oiticica is also on display. "Whistler’s Mother," painted in 1871,—its actual title is "Arrangement in Grey and Black #1 (Portrait of the Artist’s Mother)” — has visited Chicago at least twice before, in 1933 and 1954. Though originally controversial and unacceptable to its Victorian audience, by 1933 it was quite famous, described as a “million-dollar painting” (great praise during the Depression), and a major highlight of the 1933 Chicago World’s Fair, where it was seen by several hundred thousand visitors. Certainly by 1954 Whistler’s painting was an instantly recognized image, celebrated in mainstream culture. Much like Grant Wood’s "American Gothic,” Whistler’s painting became an iconic American image, with its austere gesture (though Whistler always downplayed the significance of this) toward American motherhood, marked by a good dollop of New Englandish primness and soberity.

Ironically, Whistler painted it in London; he spent almost his entire adult life in Europe and would die there in 1903. Anna McNeill Whistler herself would die in England ten years after posing for this painting, and had earlier lived in Russia for over six years. Even more ironic, the painting is in the permanent collection of the Musee d’Orsay in Paris, a pretty much completely Eurocentric pedigree for an American icon! The front pages of newspapers in Chicago covered the 1954 arrival of Whistler’s painting from the Louvre, where it was installed at the time. There were rumblings that such an American masterpiece should somehow be repatriated permanently to the U.S.  While it makes the occasional visit to America, Paris is where it continues to reside.

It is a remarkable image, and having constant access to it these last weeks has been a terrific experience for the fairly small groups of people who are visiting it (I’ve never seen more than 15-20 people in the AIC gallery where it is on display with a selection of Whistler’s works on paper and some other things. Whistler’s feat here, an intense concentration on a few hues (grey and black, of course, with a touch of brown and some flesh tones) is accompanied by a formal compositional calibration so intense and perfect that one can’t imagine any alteration to it.  If the framed print depicted on the wall was moved an inch in any direction, it seems the whole image would collapse.  So nuanced is the relation of that horizontal print to the vertical curtain. And what a curtain. That dappling on its lower half, a virtual constellation of fragments, hints at the engagement with Asian — especially Japanese — culture that was so central to Whistler.

Then there is the solidity of his mother, seated eternally like some Pharoah, her feet planted on what might be the finest footstool in the history of art. There is the tease of the framed print or drawing on the right, the rug, the wall. The figure of Anna is elongated: look where her hips are, and then her knees. She’s either slouching — and has any figure seemed less likely to slouch than Whistler’s mother? — or standing she would be about 8 feet tall. It all combines to produce an image of stupendous rigor and concentration. There is such total integration of every pictorial element that here one can see why Whistler chose a title that sounds akin to that of a musical composition, that the visual elements that comprise this painting become as harmonized and interrelated to one another as are the musical instruments in the compositions Whistler would hear around 1871. The picture is every bit as composed as a sonata.

People, as they say, vote with their feet, and this time around Whistler’s Mother is not having the effect on Chicagoans and visitors that it had on its earlier appearances here, at least not in the numbers of visits or press attention it’s generating. The world has changed, of course. You can go on YouTube and see and hear some AIC curators talking about the work while in the galleries. General admission for an adult to the AIC is now $25, and in a splintered media environment it’s difficult to get a community’s focused attention (I’ve spoken to many acquaintances that hadn’t even heard the Whistler exhibition was up). And Whistler just might not be the draw he was a generation or two (or three or four) ago. But there was a moment around 1871 when for the first time in the history of art an American artist was at the forefront of the avant-garde, not a regionalized or provincial follower, however interesting, of European models, but an active and dynamic force at the then center of contemporary art that even Europeans had to react to, whether favorably or unfavorably. James McNeill Whistler was that artist, and if the chance to see — not ‘virtually’ see, but actually look at with your own eyes — one of the major works that achieved that significance for Whistler and for visual art is of interest to you, here’s your chance.