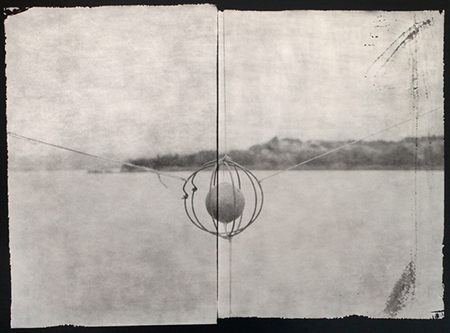 In French photographer Laurent Millet’s first Chicago exhibition, “Somnium,” the artist cites his own childhood memories of building whimsical constructions from the sticks and rocks of the rural landscape in which he played. Within the decades of series on display here, Millet engages these notions of intuition and inventiveness throughout his compositions. However, his early works from the late 1990s and early 2000s are most mysterious, with crude but precise formations depicted in anonymous, dreamy landscapes.

The 19th century techniques Millet deploys are not simply for aesthetic or nostalgic purposes. Rather, the materiality of the blotchy darkroom chemicals underscores the images’ meaning. The strange machines of Millet’s pictures are no trick of the camera or the computer; they were constructed by the artist in order to be photographed, their index upon the film a physical record of imagination made actual. Millet’s artistic aura is a kind of alchemy: equal parts fantastic and corporeal.