Deconstruction: The War for a Word
Column
by Bill Lasarow 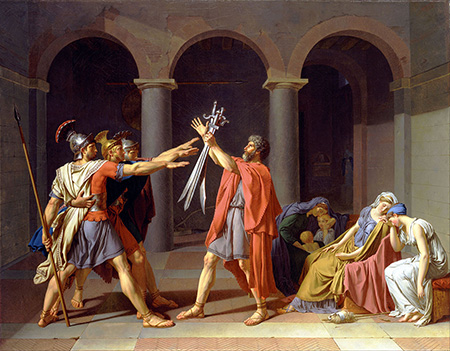 “In practice, this is a war on a century’s worth of work to keep our air and water clean; our food, drugs and workplaces safe; the rights of employees protected; and the marketplace fair and unrigged. It’s one thing to make regulations more efficient and no more intrusive than necessary. It’s another to say that all the structures of democratic government designed to protect our citizens from the abuses of concentrated private power should be swept away.”
E.J. Dionne, Washington Post, February 26, 2017

In the art world the role of philosophy has long served to inform aesthetic theory and artistic practice. A most common and reasonable critique of art so informed is that it often falls into the trap of exposition rather than exploration. It has never been art’s purpose to “prove” anyone’s theory, and as soon as a position of advocacy is visible it is perfectly fair that writers and critics pounce.

We probably are seeing the most explosive mass of art that intentionally advocates in half a century, through without quite the yeasty enlargement of the aesthetic space that pretty much all art forms experienced during that earlier period. The present generation of advanced art practice starts from a vastly more diverse set of premises to chose from than prior generations precisely due to the broad acceptance of a discourse judged not on the basis of adherence to norms but rather for smart and informed divergence.

This now well-established acceptance is rooted in agency and process. In the briefest sense, the creative individual has been deputized by our culture to operate autonomously, a welcome empowerment that shifts aesthetic decision making to evaluation of the informing context. Artwork cannot qualify as “interesting” merely because of individual agency any more than a new household appliance can be judged a success because it is different from all other appliances. Functionality in art differs from that of commerce in that the process and its resulting objects offer the engaged viewer a path to new ways to seeing, perceiving, thinking and feeling about the world and themselves.

The late Jacques Derrida, a prominent French philosopher, laid out a theory for evaluating meaning by focusing on its component parts and putting them back together through a critical process. Emerging from a long tradition of phenomenology and semiotics, the central point of deconstructivist theory is that language has meaning only because of the contrasts among various words and signs. Meaning is not fixed, but inherently and impossibly elusive. Complex and thoughtful, this is the kind of thing that philosophers love to wrestle with, but this was one of those rarified intellectual ideas that has influenced key thinkers in a whole range of different fields for a generation. As happens on occasion, it caught hold in the art world as well and became a tool, for a time a very widely employed tool for guiding the creative process. That pursuit of process has, for a century now, displaced pursuit of the masterpiece as a primary creative intent. In the case of art, deconstruction provided an explanation for what artists had already been doing for decades.

Process is, the light of such a theory, not about established aesthetic truisms, it is about honing a sensitivity to new possibilities that emerge out of present knowledge and activity. I know this sounds a bit rarified, but the shift in practice is what made art so exciting in recent decades. While I celebrate this fact and hope that it continues to stimulate artists’ creativity for the foreseeable future, the term has taken on an unwelcome timeliness thanks to the misappropriation of the dangerous political lunatic Steve Bannon.

This dedicated fascist and totalitarian hopeful, who otherwise offers no relevance whatever to the art world, recently debase this brilliant term to describe a centerpiece of the current ruling cabal’s big picture strategy: they intend, he stated publicly, to “deconstruct the administrative state.”

As E.J. Dionne and others have already pointed out, all Bannon means by “deconstruct” is to dismantle and sweep away “the structures of democratic government designed to protect our citizens from the abuses of concentrated private power.” The use of the term proposes that this creature is well read, a bona fide intellectual of the so-called populist right, an oxymoron if ever there was one. This usage, along with the supposed “movement” that his puppet claims to represent, is sheer perversion. It reflects all of the grasp that the Jacobins lead by Robespierre maintained of the meaning of the French Revolution. Just so the seeming high mindedness of Jacques-Louis David translated into the most barbaric bloodletting. The present day Jacobins are not immigrant barbarians at the gates, or America’s southern border, but those currently walking within the halls of power. The youthful would-be propaganda minister Steven Miller summed it up clearly and succinctly: the power of the executive — at least this one — “will not be questioned.” As Elliott Cohen (himself a prominent neo-conservative) has written, all are permanently morally stained by their participation in this misnamed deconstruction. Some most willingly, others in hopes that they can keep this bloated partisan ship afloat while avoiding the worst abuses of a genuine police state.

Let us understand, therefore, exactly what Mr. Bannon means, which is simply to sweep away all resistance, all critique within our government agencies, and to restock them with servants not of the state, not of the people, but who are personally answerable to one man and his inner circle. The symbolic battle for the term “deconstruction” is metaphorical. What is at stake is the loss of what artists are most singularly devoted to pursuing: Our freedom.