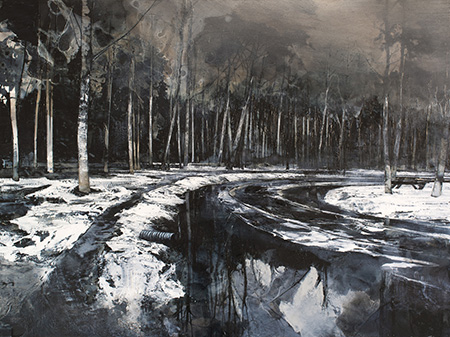 Michael Kenna and Mark Thompson are paired together for the first time, and their respective artworks bear fruitful comparison, partly because Kenna’s photographs are very painterly in the Pictorialist tradition, while Thompson’s landscape paintings are all black-and-white, as if they were vintage photographs.

British-born Thompson now lives in Sweden and most of the scenes — mostly snowy — are inspired by Scandinavia. They contain foreshortened perspectives, stark color contrasts, and the natural subject matter of vintage photographers such as Ansel Adams and Edward Weston. There are no people in Thompson’s scenes, but human presence is noticeable in railroad tracks, pathways, an abandoned campfire, and a sewage culvert on a pristine creek. These modestly sized paintings, such as “Through Habit and History,” “Breathing” and “Back Behind the Branches” offer up forlorn, lonely vistas, chilling and remote. Except for two thin red poles of mysterious origin in “Through Habit and History,” color is restricted to black and white. However, these shades are constructed of many other colors, including an icy blue that is beautiful and enhancing.

In “The Slow Pass of Hours” a steep aerial view is presented, attained only by hiking into a forest. The solitude of extreme nature is another palpable theme, accentuated by rich painterly techniques such as thickly spread paint and other areas where paint is scraped down to reveal under-layers of faint color. Educated at the famed Slade School of Fine Art in London, Thompson resists the avant-garde of contemporary art and offers instead intriguing vistas of winter sites that haunt and comprise his oeuvre. The recipient of travel fellowships to Iceland, Sweden and Norway, Thompson should try hiking the Cascade and Rocky Mountains, too. If he did, he could make a major contribution to the American landscape painting tradition.

The widely exhibited Kenna lives in Seattle, but travels constantly. The work here is not new at all, but displays an earlier body of work from 1995, “Industrial Revelations — The Rouge and other Sites,” which was previously exhibited at the Detroit Institute of Arts. The Ford River Rouge auto plant in Dearborn, Michigan is a huge industrial complex. The 22 prints on view are included in a book, “Michael Kenna: Rouge.” They are good examples of the artist’s ability to turn photographs into painterly studies complete with blurry “brushwork,” stark contrasts, and rigorous compositions that suggest, among other things, abstract expressionism and hard-edge painting. “Study 9” (1993) has cross-bars as gesturally bold as a Franz Kline painting. ”Study 57” (1994), with its gears and wheels, recalls Paul Strand. “Study 100” (1995), a nighttime shot (as many are), fuses smoke, light and shadow to echo J. M. W. Turner.

While building on earlier artists, Kenna has definitely advanced the art of photography, but now runs the risk of neglect as advanced tactics become commonly deployed tools for many current artists. This shouldn’t bother Kenna, who has received numerous awards for his international subjects, including being made a knight of the French order of arts and letters in 2000. His photographs of French gardens and historic architecture are, in one sense, a world away from River Rouge. In another sense, though, the industrial views take on a grandeur of their own, elevating an outdated factory to landmark status.

More than twenty years after their inception, the “Rouge” photographs look better than ever. Growing out of modern art photography with its strict cropped-detail compositions and celebration of the machine aesthetic, each view is part of a greater whole. Only occasionally, as in “Study 14” and “Study 128” do we get a more distanced peek at the bigger picture. The auto plant seems more honored here than memorialized, more investigated to artistic ends, rather than upfront documentation.

At a time when straightforward photography is being eclipsed by other media, Kenna deserves American master status, something curators in Japan, France and elsewhere have already conferred. His first retrospective at the Bibliothèque Nationale in Paris in 2009 was followed by others in Spain, Russia, Germany and New Mexico. Seen with the Thompson paintings, viewers may witness two major artists in meaningful dialogue.