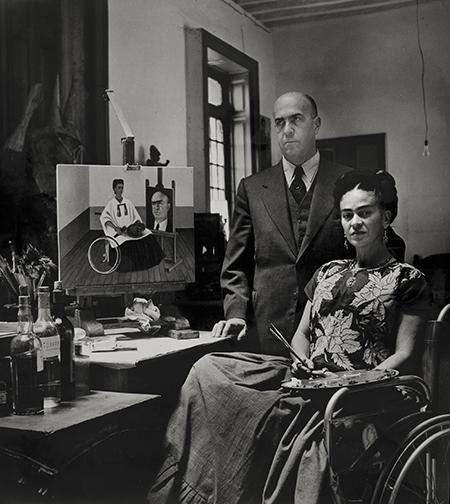 In a time of renewed political activism, it is fitting that photographs of and by Frida Kahlo — along with those of her friends and heroes, all from her personal collection — are being displayed. Kahlo was very much influenced in her art and life by left-wing politics, as well as by the rebellious Mexicanidad cultural movement. She had a tumultuous marriage with artist/activist Diego Rivera, represented with several photos in this exhibition. And she was a lover of exiled Russian revolutionary Leon Trotsky, whose photo “Leon Trotsky” (n.d.) is in this show in the section, “Politics, Revolutions and Diego.” His picture, alongside those of “Vladimir Ilich Uliánov Lenin” (1919) and “Joseph V. Stalin” (n.d.), reflects the artist’s admiration for political heroes … or anti-heroes. Other photos in this section include “Young Soviet Girls,” of girls exercising, and “Red Square, Moscow” (both 1928), of soldiers in Red Square, among others from the Soviet Union’s early days.

But there’s far more to this exhibition. Comprised of 240 vintage images, there are family pictures, individual portraits, particularly of Kahlo, depictions of her hospital stays and recoveries, and photographs of and by her friends, associates and lovers. These include photos by modernist colleagues Alfred Stieglitz, Man Ray, Edward Weston, Tina Modotti, and Lola and Manuel Álvarez Bravo. All images were selected from Kahlo’s and Rivera’s large private collection, unearthed in 2007 from the Frida Kahlo Museum, or Casa Azul as it is informally called, in Coyoacán, Mexico. The exhibition has been travelling to museums in the U.S. and around the world, including the nearby Museum of Latin American Art where it appeared in 2014.

Kahlo’s photographer father, Guillermo, a German immigrant, had a profound influence on her, teaching her how to look directly into the camera and mentoring her in the craft of photography. As she progressed in picture taking, the young artist personalized many images, including kissing, cutting, manipulating and signing them. She wrote notes and poems on the backs of some photos, especially on those of Rivera.

The show illustrates how Kahlo carefully crafted her own public image while posing for photographers Lucienne Bloch, Gisèle Freund and Nickolas Muray. Kahlo had survived polio as a child, and nearly died from the infamous bus accident at age 18. Well aware of her own mortality, she was creating a persona to endure beyond her short lifetime. Curator Pablo Ortiz Monasterio explains in the wall text, “This holding clearly reflects the interests that Frida had throughout her tumultuous life: her family, her fascination with Diego and other lovers, the broken body and medical science, her friends and some enemies, the political struggle and art ...”

The exhibition, organized thematically, begins with “Her Parents: Guillermo and Matilde,” containing photos of the Kahlo family, including portraits of 19th century ancestors, and those of Frida (circa 1907) as an infant. There are formal shots of her mother, wearing the ethnic Mexican clothing that the daughter later made famous, and of her father. This section also includes Gisèle Freund’s 1951 “Frida Painting the Portrait of Her Father,” in which Kahlo, in Mexican garb is lovingly painting her handsome father, his camera in the background.

The “La Casa Azul” section includes photographs of her family and friends, taken at this site, which was Kahlo’s home alongside Rivera’s pink and white house from 1934 until their 1939 divorce (they remarried the following year). As her health declined throughout the 1940s and her traveling reduced, La Casa Azul would serve as residence, studio and retreat for the rest of her life. Lola Álvarez Bravo’s photograph of “Frida Kahlo” (1944) is a classic image of the artist seated against her home’s outside wall. This depiction exemplifies Bravo's compassionate and formalistic eye, and her skilled use of light and shadow.

“Frida’s loved ones were her closest friends, her family, some of her lovers and above all, Diego,” writes curator Monasterio about the “Amores” section of the exhibition. He adds, “Standing out are the photographs of Frida and Tina Modotti, who on occasion advised Frida on photographic issues.” Also included in this section are a photo of the handsome “Nickolas Muray (Photographer)” (n.d.), a celebrity photographer and Kahlo’s long-time lover; an anonymous shot of Rivera painting, “Diego Rivera (in His San Angel Studio)” (ca. 1940), with Kahlo’s large red lipstick mark embedded into its center; the seductive “Actress Paulette Goddard (in Diego’s San Angel Studio)” (1933) by Esther Born; and “Isamu Noguchi (Sculptor)” (1935), another of Kahlo’s lovers, by Edward Weston.

The most compelling section is “The Broken Body,” recording Kahlo’s recuperative periods from the polio episode and the bus accident, as well as her subsequent addiction to painkillers. Images of the artist in a hospital bed, in traction and being visited by friends and family echo themes of suffering and victimization often portrayed in her paintings. These include “Frida in Traction” (1940) by Nickolas Muray. Some critics believe that the artist used these pictures as source material and inspiration for her paintings. As Laura González Flores explains in the accompanying catalog, “If these photographs are fascinating, it is not due to the objective information we get from them, but because frozen within them is a sort of perpetual present, the social drama of the Casa Azul.”