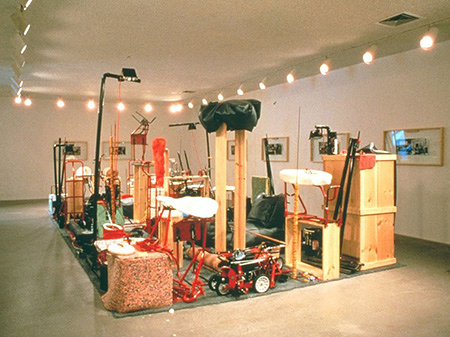 When Jason Rhoades passed away in 2006 at the age of 41 he was at the apex of his short career. During his life he pushed the boundaries of what art could be in his expansive installations. After receiving his MFA at UCLA in 1993, where Rhoades was mentored by noted artists Richard Jackson and Paul McCarthy, he began to show locally, nationally and not too long after that, internationally. He quickly became known as a "bad boy" artist who broke rules, did not follow aesthetic conventions, and demanded complete control over his installations. Rhoades fully embraced the idea of site specificity and immersion. He favored dense, hard to navigate spaces through which viewers were forced to carve their own path. The only current comparison would be the recent installations by Swiss artist Thomas Hirshhorn, who recently exhibited at The Mistake Room.

What distinguished Rhoades from other artists filling rooms with objects was his ability to create order from chaos and to weave a trajectory that produced meaning through the presentation of too much stuff. Rhoades incorporated tropes from art history, politics and popular culture into his pieces. But they were also extremely personal, often based on events in his life or people that he knew. Among the materials found in a Rhoades installation are colored five-gallon paint buckets, folding tables, neon words suspended from the ceiling by a tangle of extension cords, metal shelving, throw rugs, functioning machinery and an overflow of seemingly undesirable objects.

Although Rhoades was familiar to the American audience, he was lauded in Europe and was included in the 1997 Venice Biennale. Each installation he created was considered a breakthrough work. One of the first, in 1994, entitled "Swedish Erotic and Fiero Parts" at Rosamund Felsen Gallery, then in a yellow building in West Hollywood was so site specific that building color — yellow — served as the point of departure. Many of the objects Rhoades included — whether store bought or hand-made — were covered by yellow notepad paper. By filling the gallery with an array of furniture-like objects, Rhoades created a setting that could be thought of as an IKEA showroom from hell. This installation was also his first to include a real car, a broken yellow Fiero that was situated in the back of the gallery. It caused audiences to pause and wonder, "what next?"

It is no small feat to recreate six of Rhoades' immersive installations, which will occupy about 28,000 square feet of gallery space. It is a marvel that Rhoades works could be shown, deinstalled, packed up and then reshown at all. They are all complex, multi-level, over the top presentations. In some ways however, the recreations are too clean and lack the spontaneity of Rhoades' presence. Which leads to the question of showing site specific works in new locations without the artist being there.

"My Brother / Brancuzi" was Rhoades' contribution to the 1995 Whitney Biennale, and later shown at Epicenter Ljublijana in 1997. It it he tried to look at “[Constantin] Brancusi emotionally and his brother formally." The installation consisted of a series of black and white photographs that featured Brancusi's sculptures juxtaposed with images of Rhoades and his brother in his garage studio. Centered in the middle of the gallery was a huge amalgamation of machines and tools, including a mini-bike and a donut maker all carefully organized on a gray carpet. In an interview Rhoades talked about the work as being about proximity: “… proximity in pieces is like a valid part of sculpture, that something is near that can be moved and kind of go away and come back." Many of his pieces were also concerned with "physicality of ephemerality and ephemerality of physicality."

"The Creation Myth" was first installed at the Hauser and Wirth Gallery in Zurich. In this gigantic installation Rhoades "represents the function of the brain in fictional terms as a spatial metaphor, juxtaposing four levels — the archetypal, the real, the unconscious and the rebellious using machines, video, tree-trunks, folding tables, sound and everyday objects." Snaking through the space is a huge red duct big enough to crawl through. The installation, according to Adrian Searl in The Guardian, "is a model of the artist's mind, his private myth of self-creation."

"My Madinah. In pursuit of my ermitage ..." features hundreds of neon words (all slang terms for vagina) suspended from the ceiling in every color imaginable over a carpet of towels. The effect is at once enticing and repulsive. Also recreated is "Black Pussy... and the Pagan Idol Workshop,” first installed at Hauser and Wirth London, and “Tijuanatanjierchandelier" created for the CAC Centro de Arte Contemporaneo in Malaga, Spain. In each of these works Rhoades fills the space with a purposeful mixture of store-bought, appropriated and homemade objects that require the viewer to enmesh themselves in exploring his world.

Though there have been retrospective exhibitions of Rhoades' work since his death, the Los Angeles audience has not yet had the opportunity to experience this many immersive works simultaneously. It remains to be seen whether less or more or more is less; however it is without question that Rhoades pushed buttons and boundaries that will continue to repulse, delight and challenge us.