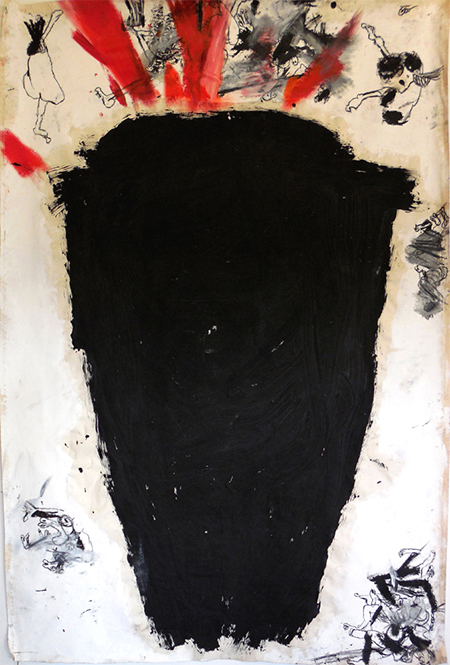 In 2011, Greta Young had a one-night show called "Lights Out, Art in the Dark" at Eli Levin's studio on Canyon Road. Young equipped her visitors with flashlights and sent them on a spelunking expedition through the darkened space. As the small spotlights swung around the room, viewers discovered the artist's mixed media works in bits and pieces. The evening's format fit the form of Young's drawing-painting hybrids, which often depict fragmented figures between pools of black pigment. Using shadows, the artist managed to send the scrawl of her black oil stick out of the picture plane and into Levin's crowded space.

In "little people," a solo exhibition at one of Santa Fe's newest galleries, the most striking piece manages the same feat but without the blackout gimmick. At the center of ”Sillustani Red" (Sillustani is the name of a pre-Incan cemetery in Peru) is an oblong black hole that has yanked a number of contorted figures into its orbit. Deformed cartoons twist through the soiled white space, headed for oblivion. There's something threatening about this enormous piece: the dark passage is large enough that it could swallow up a person, should it magically spring to life.

The rest of the show's menagerie is nearly as disturbing. In works with titles such as "Falling Out" and "Undo," Young's messy strokes mark out contorted arms, legs, fingers and toes, but few faces. The shadows spread from one work to the next, scrambling any sense of identity or perspective. This is humanity, torn apart in service of abstraction. The violence is punctuated with wild smears of red pigment. Young's idiosyncratic, neo-expressionistic aesthetic has found its moment. She captures the disorienting, dehumanizing nadir of our contemporary chaos on canvas and paper. To view it is terrifying, and strangely cathartic.